The 2014 NIH Research Festival, Sept. 22–24, focused on the human brain for two, very specific, reasons: to coincide with the White House BRAIN Initiative and to highlight the John Edward Porter Neuroscience Research Center, which opened earlier this year on the NIH campus.

“We chose the brain as a theme to recognize President Obama’s BRAIN Initiative as well as the brand new Porter Neuroscience Center on the NIH Bethesda campus,” said Christopher Wanjeck, director of communications, NIH Office of Intramural Research, and a member of the coordinating committee.  The new research center, “now houses hundreds of neuroscientists from 10 different NIH institutes,” he said.

The real focus of his talk, however, was the brain. Collins described the NIH response to the BRAIN Initiative, launched in April 2013 by President Obama. BRAIN is an acronym for Brain Research through Advancing Innovative Neurotechnologies. Collins noted that NIH would soon announce the awardees of $46 million in new grants for the BRAIN Initiative.

Collins also discussed the work NIH is doing with the U.S. Food and Drug Administration through the new Accelerating Medicines Partnership to bring diagnostics and therapies to patients more rapidly and at a lower cost.

In addition, Collins talked about the importance of diversity and said he is working on recruiting and retaining a diverse workforce of scientific researchers. Finally, he encouraged everyone in the audience to follow him on Twitter and to read the NIH Director’s Blog.

Following Collins’ talk, the winners of the Fellows Award for Research Excellence (FARE) were recognized. These winners came from across all the NIH institutes and centers.

The afternoon included a poster session, in which several NCI at Frederick scientists and administrative staff presented the work or services that their labs or offices provide to NIH.  Julie Hartman, program analyst, NCI at Frederick Office of Scientific Operations, presented a poster on training programs at NCI at Frederick that specifically focus on the next generation of scientists. “This is our second year participating at the festival, and we’re hoping to get some good foot traffic of fellows or others who are interested in coming up to our campus,” Hartman said.

Jacqueline Roberts, NIH Office of Intramural Research and coordinator of the event, was pleased with the attendance. “The festival has been having a great year now that we are not shut down by the government, and we are very excited to hear everyone’s talks and poster presentations. It is always good to see it all come together,” she said. 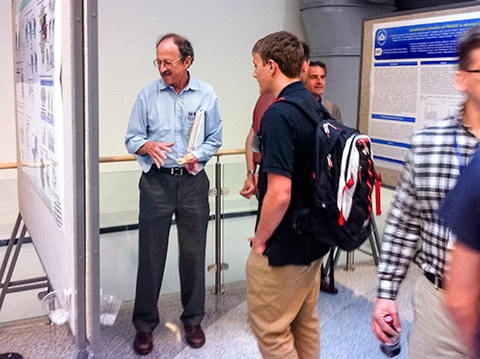 Following the scientific directors’ poster session, people lined up to talk directly with the presenters.

The event was a good opportunity to bring together the scientists—and the science—of NCI at Frederick and NCI, Bethesda.  “We wanted to help other people who were in the same boat that we were a few years ago, and share our knowledge that we learned, as well as to see what everyone else has to offer,” Giambarresi said.