Education and outreach efforts for cervical cancer are usually observed during the month of January. But as a cervical cancer survivor, Lockard Toms never misses an opportunity to educate women about the disease—and what can be a simple way to prevent it.

Almost all cervical cancers are caused by the human papillomavirus (HPV); in fact, the virus is found in about 99 percent of cervical cancers. HPV is also the most common sexually transmitted infection in the United States, with an estimated 80 percent of women who reach 50 infected with some type of HPV.

More than 13,000 women in the United States are diagnosed with cervical cancer annually, and sadly, more than 4,000 of them die of the disease every year. Although routine Pap tests can detect pre-cancerous or cancerous cellular changes in the cervix, the HPV vaccine can prevent most cases of cervical cancer.

The only FDA-approved vaccine currently available in the United States, marketed under the name Gardasil®9, protects against nine of more than 200 strains of HPV that have been identified. Currently, two doses of the vaccine are recommended for boys and girls ages 9-14 to provide full immunity, although researchers at the Frederick National Laboratory are studying the possibility that a single dose would afford long-term immunity and protection against infection (see sidebar). 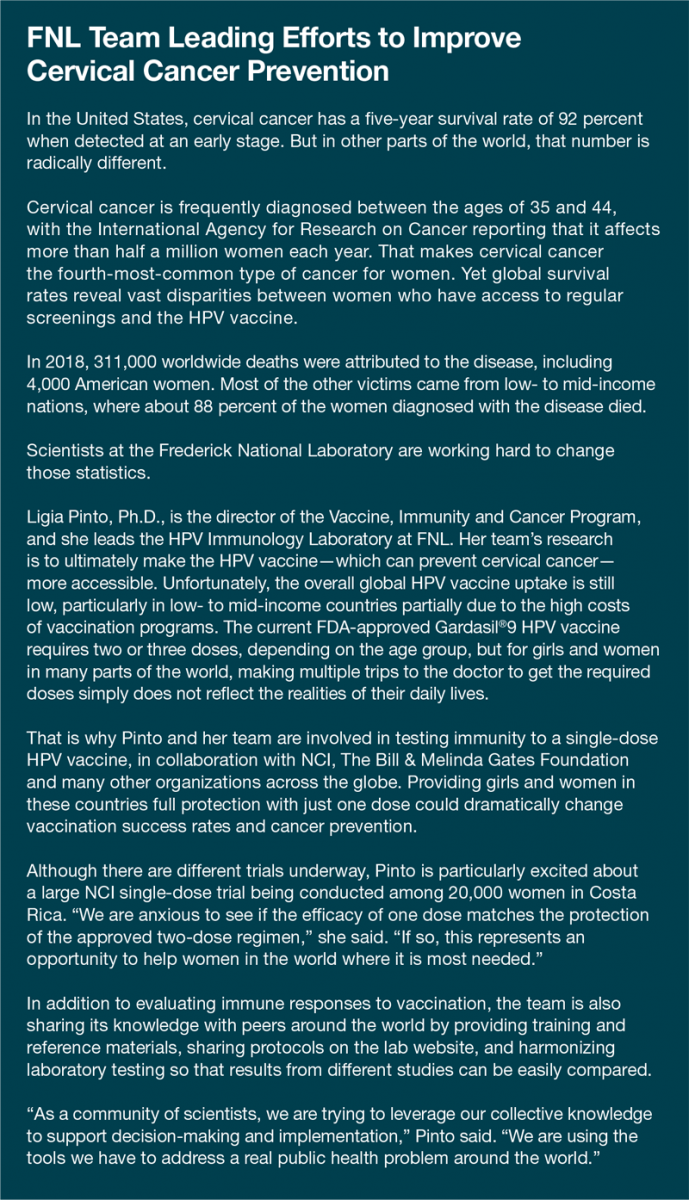 Most women receive their first screening for cervical cancer between the ages of 19 to 21, but by that time, the virus may already be present in their bodies. The disease tends to be slow-growing, with research revealing that most women who have abnormal cervical cell changes that progress to cervical cancer have never had a Pap smear or have not had one in the previous three to five years.

That makes prevention efforts more critical, especially since cervical cancer can be a “silent killer.” It tends to be asymptomatic in the early stages, with the most common signs of the disease, such as abnormal bleeding or discharge between menstrual cycles or after intercourse, weight loss, fatigue or swelling in the legs not appearing until the cancer has progressed.

There are no known risks to starting the series of three HPV vaccines in individuals as young as nine. But researchers believe there are several benefits, including:

To support January’s Cervical Cancer Awareness efforts, the Occupational Health Services team has prepared a special WebEx presentation on the topic and is running informational banners on internal NCI message channels. They have also produced informational materials such as emails and posters about the disease, including risk factors and the benefits of vaccination.

Lockard Toms was lucky that her cancer was detected early through regular Pap smears. She was already the mother of one and had no symptoms of cervical cancer when her doctor called her at 10:30 on a Friday night to tell her that her latest Pap smear had indicated the presence of abnormal cells. But this was not the first time: two previous Pap smears had indicated the same thing. They needed to act.

Because Lockard Toms hoped to have another child, she and her doctor decided she could undergo cryotherapy to freeze sections of her cervix. But when she went for a post-natal Pap smear after the birth of her second daughter, she was diagnosed with early (Stage 0) cervical cancer. So Lockard Toms underwent a complete hysterectomy. Nearly 20 years later, she remains cancer free.

She willingly shares her story because she knows the ending could be different. If it means helping anyone avoid cancer, “I’ll tell anyone who will listen,” she said.