Editor’s note: This article is adapted from Dr. Young’s January 12, 2015, post to the I am Intramural Blog of the Intramural Research Program.

When I started this project, it was not my objective to develop a model for any specific disease, nor did I even suspect that the ultimate result would be some insight into autoimmune disease. The basic research question I was asking was why there are sequences in the 3? untranslated region (3?UTR) of the interferon-gamma (IFN-gamma) mRNA that are more highly conserved than in the coding region of the gene.

An examination of the mRNA sequence of the IFN-gamma gene from just about any species, from white rhinoceros to badger to human (and even, to some extent, in the whale shark), reveals that this 3?UTR element is strongly conserved, thus indicating that it has an important role in regulating IFN-gamma gene expression. It turns out that this region is enriched in AUUA sequences that make up what is termed the ARE (AU-rich element). At least a third of genes have such an element, and this region has been shown to mediate destruction of mRNA through interaction with different RNA-binding proteins. Thus, the conservation of this element indicates that rapid destruction of the IFN-gamma mRNA is an important mechanism for controlling IFN-gamma expression that has been retained throughout evolution.

Studies on these mice are ongoing, but we have made some significant observations related to certain autoimmune diseases. First, we observed that the C57BL/6 strain of these mice develop a lupus-like syndrome by 10–12 weeks of age. In addition, we have recently learned that they also show evidence of primary biliary cirrhosis (PBC) with a female bias, consistent to what is observed in humans (90 percent of cases are in women). Previous mouse models of PBC did not show a sex bias, and, in collaboration with an extramural lab that specializes in the human disease (M. Eric Gershwin, M.D., University of California, Davis), we are working on understanding the mechanism involved in disease initiation and progression. 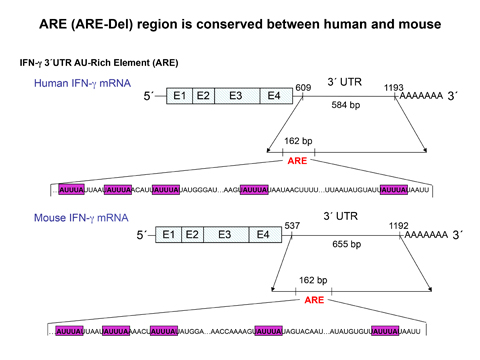 Finally, when we eliminated the ARE and crossed the mice onto the Balb/c genetic background, we found evidence for the development of aplastic anemia, a disease whose connection to IFN-gamma had been shown for some time by the lab of Neal Young, M.D., National Heart, Lung, and Blood Institute. Furthermore, using an antibody that neutralizes IFN-gamma, we were able to neutralize some of the effects observed in the mouse bone marrow, thus suggesting that targeting IFN-gamma may be worthy of consideration as a potential treatment for this disease.

I strongly believe that this project, based on a very basic research question stimulated by the support and encouragement of the NIH intramural program, reinforces the value of basic research. It demonstrates that the outcome of asking such questions cannot be predicted in advance, but may well lead to a better understanding of human disease.