The facility—a high-energy particle accelerator—produces the clearest and most detailed images of the proteins involved in the disease, which causes bruising under the skin, nosebleeds, bleeding from the gums, and, in rare cases, brain hemorrhaging.

With unexplained ITC, the patient’s immune system is tricked into destroying platelets, the blood cells responsible for clotting. The ability to visualize the structures of proteins involved in this molecular deception will aid in understanding the disorder and designing effective strategies for prevention and treatment.

A recent research paper on the disease, published in the scientific journal Blood, cited work performed at the Argonne National Laboratory particle accelerator, which the Frederick National Laboratory for Cancer Research (operated by Leidos Biomed) helped set up and continues to support.

The study is the latest in a long line of research enabled by the facility, known as the Advanced Photon Source (APS), which was created by the Department of Energy’s Argonne National Lab in 1995 to meet the specific needs of researchers from all over the United States for studies in materials science, chemistry, physics, biology, and environmental science. At the time, biomedical researchers could not get enough experiment time for advancing the burgeoning field of structural biology.

Then, in 2002, the National Cancer Institute and the National Institute of General Medical Sciences came together to address the need, using the Federally Funded Research and Development Center—now known as FNL—to assist.

Dauter and Pletnev, working with FNL scientific staff in the NCI intramural program, perform X-ray crystallography research at the APS to see how protein molecules and DNA operate in cells in living systems. X-ray crystallography allows researchers to measure light diffraction from a crystal and use that information to produce a 3-D picture of the crystal’s atomic structure.

According to Dauter, “The novel approaches to solving macromolecular X-ray crystal structures provide the crystallographic community with alternative or more powerful ways to elucidate atomic three-dimensional structures of biologically and medically important proteins, DNA, RNA, and their complexes. They form the basis for designing novel medicines against diseases such as cancer, HIV, and bacterial and [viral] infections.”

GM/CA@APS is dedicated to structural biology research in the NIH extramural program and has been used in several significant studies in its short lifespan, including identifying the structures of the receptors of GPCR, or G-protein coupled receptors. GPCRs constitute a large family of receptors that sense molecules outside of the cell and activate cellular responses. Because they are involved in many diseases, GPCRs are targeted by a large portion of modern pharmaceuticals. In 2012, Robert Lefkowitz and Brian Kobilka received the Nobel Prize in Chemistry for their study of GPCRs.

Microcrystallography is a relatively new frontier in the field of structural biology and can reveal how proteins function on a microscopic level. To put the scale in perspective, Smith equates it to “shooting a beam of light from NIH headquarters in Bethesda, Maryland and trying to hit a pumpkin in Anchorage, Alaska.”

The tiny beams of the GM/CA@APS beamlines are also the first to utilize a novel APS technology that splits a single X-ray beam into two and then manipulates each one so it's just as intense as the original. The result: much faster research.

The work being done at GM/CA@APS has profound and wide-ranging implications, including understanding pathogenesis (how bacteria and viruses produce proteins that allow them to hide from the body’s immune system) and determining what, precisely, goes wrong when cells mutate in a cancer. Ultimately, using the knowledge gained at GM/CA@APS will help researchers develop new and better pharmaceuticals. 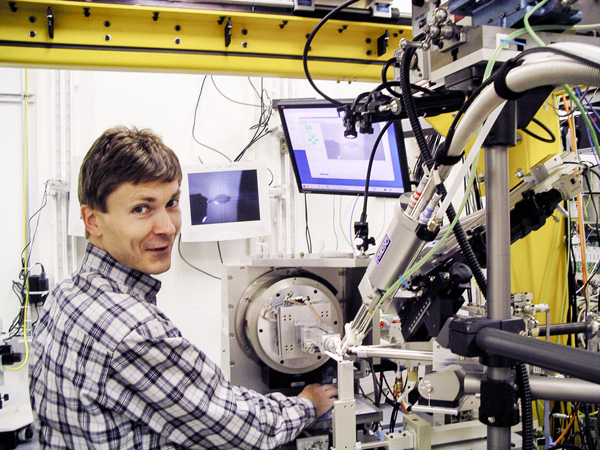