A new breed of lab animals, dubbed “glowing head mice,” may do a better job than conventional mice in predicting the success of experimental cancer drugs—while also helping to meet an urgent need for more realistic preclinical animal models.

The mice were developed to tolerate often-used light-emitting molecules, such as luciferase from fireflies and green fluorescent protein (GFP) from jellyfish. These “optical reporters” are useful for monitoring the effect of experimental therapies in live animals over time because they emit an immediate and easily detected light signal showing whether a tumor inside the animal’s body is shrinking as desired.

But there is a drawback: these optical reporters trigger an immune response in conventional, wild-type mice. This immune response can either eliminate the reporter molecules altogether or can influence the way a tumor responds to an anticancer drug, thereby spoiling results of preclinical testing.

Optical reporters are best used in laboratory mice whose immune systems have been disabled. But some experimental drugs, particularly immunotherapies, require evaluation in the presence of an intact and robust immune system.

Glowing head mice were developed at the Frederick National Lab to address this issue. They offer an effective system for preclinical testing of immunotherapies and other anticancer therapies that is both time and cost effective. The research is described in the November 2014 issue of PLOS ONE.

The research team of government and contractor scientists modified a strain of mice using genetic alterations that converted luciferase and GFP into “self” molecules, preventing them from being recognized by the immune system. The scientists first expressed the genetic modifications in the pituitary gland, near the brain—hence, the name “glowing head.”

The researchers went on to transplant a common tumor type tagged with GFP into two groups of mice: one group of glowing head mice and a second of conventional, wild-type mice. They let the tumors grow. Later they took serum from both groups of mice. Serum from the conventional, wild-type mice showed significant levels of antibodies against GFP, indicating an immune response. But serum taken from the glowing head mice showed no evidence of an immune response.

In their research report, the scientists concluded that glowing head mice “would constitute a superior preclinical model for drug assessment.” 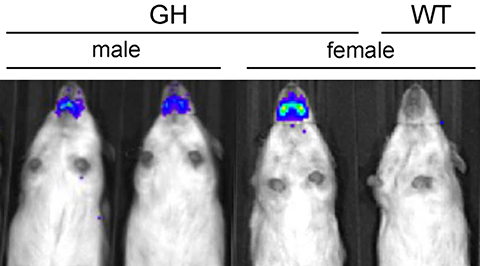 Glowing head mice “will facilitate the assessment of metastatic and recurrent disease, permit the evaluation of immunomodulatory drugs both alone and in combination with small molecule inhibitors, and enhance the ability of preclinical models to predict clinical efficacy,” they wrote.

Photo caption: The optical expression pattern of the transgene in glowing head (GH) mice, as visualized by bioluminescence imaging. Reporter activity was detected in the anterior pituitary gland of both genders and the testes of male mice.