Mark Twain once said that the secret to getting ahead is getting started. A group of Frederick High School (FHS) students clearly took that advice to heart when they jumped at the chance to learn more about careers in science, including the Werner H. Kirsten Student Internship Program at NCI at Frederick and Frederick National Laboratory (FNL).

Walter G. Hubert, Ph.D., scientific program director for NCI at Frederick's Office of Scientific Operations, spoke to 14 FHS students who participated in a “Joy of Scientific Discovery” session as part of the school’s LYNX (Linking Youth to New Experiences) program this past spring.

One of the program’s major pillars involves creating partnerships with Frederick businesses and organizations. According to Beth Genemore Sands, a LYNX advocate at Frederick High, more than 180 external partners have signed up to participate since the program launched in 2017, including Leidos Biomedical Research, Inc., which as a member of the Frederick County Chamber of Commerce was one of the first businesses to sign on to the initiative. NCI at Frederick also became a partner right away, with Hubert happy to expand upon the institute’s longstanding partnership with the Biomedical Sciences Program at FCPS’ Career and Technology Center.

He has made annual visits to meet with LYNX students since then, although the pandemic did result in a pause in on-site presentations. His visit to FHS in March marked the first time in two years that he was able to meet face-to-face with students. The return to in-person events meant that during his visit, Hubert could engage students in exercises that are included in the Kirsten internship program’s “Science Skills Bootcamp.” This included hands-on scientific exploration with microscopes and micro-pipettors.

Over the course of 90 minutes, 14 students from grades nine through 11 broke up into three small groups, rotating through various stations. While one team worked with microscopes to identify different strains of bacteria and mammalian tissue sections, another team loaded and delivered varying micro-pipette volumes.

Simultaneously, a group of students met with Hubert to learn of his passion for science and the career choices he made. Students then shared their career aspirations with him so he could help them discover ways to make them possible.

And what impressive aspirations they were.

Although the students acknowledged they aren’t quite sure what they want to do in the future, they expressed interest in things such as zoology, machine learning and artificial intelligence (AI), biotechnology, and medical care for the deaf community.

Hubert reassured them that they don’t have to have their entire career paths mapped out by the age of 18. He spoke from first-hand knowledge. His career path started as an electronics technician with the German Navy. He quickly discovered his passion for science and upon completion of his Navy service, went on to pursue degrees in chemistry, molecular biology, and experimental oncology. He has since used his education and training to hold positions at some of the nation’s leading research institutions.

“Don’t worry too much if you don’t have a final direction just yet,” he told the students. “Learning is lifelong. There are no careers today that do not go without some changes along the way. Keep an open mind…life changes.”

The important thing, he said, is to “Know yourself well. What do you like to do? What are you good at? What is hard for you?”

He encouraged them to find mentors and to challenge themselves, especially by seeking out internships or volunteering for organizations whose work interests them.

Based on the students’ feedback, they took that advice to heart. “I learned that lab science can lead into many sub-careers,” one student said. “I found it interesting (to hear about) the internship opportunities available, and that there are opportunities related to data science.”

Encouraging the Next Generation of Scientists

Several of the students in attendance were already aware of the Kirsten internship program prior to hearing Hubert speak—and at least one had already applied. But Hubert took the opportunity to reinforce the value of the program, both to the students as they look to their own careers and to the field of science as a whole.

“I call my engagement with LYNX ‘talent pipeline development,’” he said. “I come from a working-class background, and in school, I had no science mentors. I believe we can make a difference at this level by being here and helping to inspire young people and support our agency’s mission to find the next generation of scientists.”

For Mark Trice, Frederick High’s science department chair, Hubert reinforced many of the messages Trice shared with his students every day in the classroom. “We are really focused on helping students transition from having to simply regurgitate a lot of facts to begin to exercise critical thinking,” he said.

Working with micro-pipettors and microscopes gave the students an opportunity to do just that. At the microscope station, the students were challenged to identify different forms of bacteria as well as to examine a mouse embryo at 16.5 days gestation that was prepared by FNL's Laboratory Animal Sciences Program. For one student, that exercise was particularly enlightening.

“I found the murine embryo examining to be the most interesting!” they said. “It was incredible to see how similar the mice embryos were to human embryos.”

Over at the micro-pipetting station, many of the students experienced the challenges of correctly measuring, loading, and delivering solutions to micro-pipettors of different sizes. “Learning about the usage of pipettes was interesting, because I have never used them before,” one student remarked.

Opening Minds to What is Possible

Providing career-relevant and hands-on learning is key to the LYNX program. “Our hope is that when students have experiences like this, it either fortifies their interest or eliminates it and opens them to exploring other things,” said Sands.

Discovering unanticipated outcomes is what learning is all about, Trice added. He continually reminds his students that when experiments don’t work out the way they planned, that does not mean they failed. “Failure is the first step to success,” he said. “The key is to identify where you went wrong and fix it.”

That applies to exploring career paths and choices as well, Hubert says. He realizes that working at a lab bench all day isn’t something that appeals to everyone. So he encourages others at NCI at Frederick and FNL to get involved in the LYNX partnership efforts so that they can open students’ minds to the array of opportunities available to them, including data science, scientific management, scientific library operation, science writing, and others.

“Inspiring LYNX students in the 9th and 10th grades allows them to still take relevant courses and become more valuable candidates for the Kirsten internship program,” Hubert said. “There is something about seeing the wonder in youngsters’ eyes when they become aware that science is many things. The goal is to make sure we reach them early enough to motivate them and show them what is possible.” 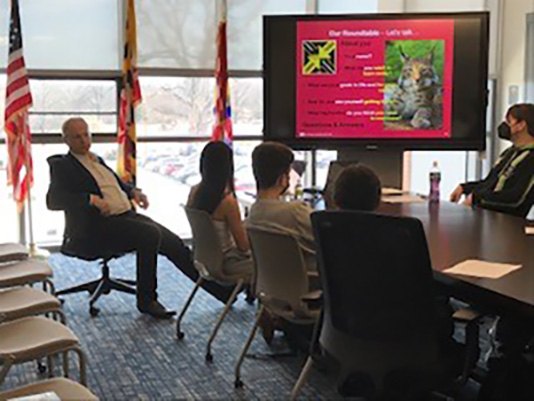