Werner H. Kirstin (WHK) student intern Ben Freed was one of 40 finalists to compete in the Intel Science Talent Search (STS) in Washington, DC, in March.

“It was seven intense days of interacting with amazing judges and incredibly smart and interesting students. We met President Obama, and then the MIT astronomy lab named minor planets after each of us,” Freed said of the competition.

An intern in the Synthetic Biologics Core, Cancer and Inflammation Program (CIP), Center for Cancer Research (CCR), Freed was selected as a finalist from a group of 300 semifinalists, which also included student interns Tina Ju, Madelyne Xiao, and Jessica Yau.

The Intel STS is a national high school science and math competition that “recognizes 40 high school seniors who are poised to create new technologies and solutions that will positively impact people’s lives,” according to the Society for Science & the Public’s website. Students submit their independent research projects for review by three or more Ph.D. scientists, mathematicians, or engineers, who are experts in the subject area of the research project submitted.

K-Ras is a member of the Ras family of proteins, which control intracellular signaling. Oncogenic Ras signaling plays a role in about one-third of all cancers, according to an article in CCR’s online publication CCR Connections.

“The role the HVR plays in K-Ras’s signaling ability not only demonstrates a previously unknown regulatory mechanism, but also suggests the feasibility of disrupting Ras signaling with peptides and peptidomimetics derived from the K-Ras HVR,” Freed said.

Freed’s findings suggest another way to interfere with Ras signaling, which causes the uncontrolled cell growth leading to cancer. These findings could be translated into the development of therapeutics that block access to the effector binding region of Ras.

Freed graduates from Governor Thomas Johnson High School in May and plans to attend the Massachusetts Institute of Technology (MIT) to study mechanical engineering.

Freed and his award-winning research were featured in a video on WHAG-TV online: http://www.your4state.com/story/d/story/local-student-recongized-as-a-top-youth-scientist/31325/3evXCWClk0iIcBaM8-NQPA.

High school seniors Tina Ju, Madelyne Xiao, and Jessica Yau were selected as semifinalists from among 1,794 entrants in the Intel STS. Entrants came from 489 high schools in 45 states, the District of Columbia, and seven overseas schools, according to the Intel STS 2014 Semifinalist Book. 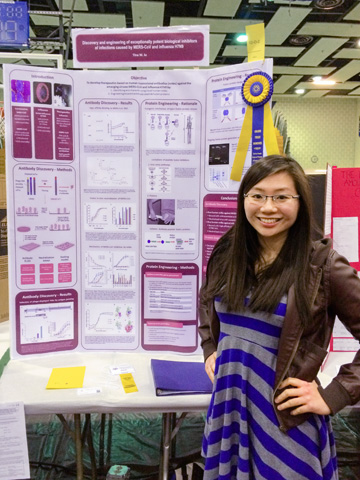 “Since current therapies are not very effective against these emerging viruses, I aimed to develop antibody-based therapeutics that can be used to treat and/or prevent these viruses,” Ju said.

While the mAbs that Ju developed against MERS-CoV were highly potent in neutralizing the virus, the mAbs against H7N9 had only modest potency. Going a step further, she worked to design and engineer a new class of antibody-peptide fusion proteins, with “the potential to exhibit exceptionally potent, bispecific neutralization of not only these viruses but also all type I fusion protein viruses, such as HIV, coronaviruses, and influenza.”

Ju is still deciding whether she will attend Stanford, MIT, or Columbia in the fall, and she plans to major in biological or biomedical engineering.

“This project has shown me that the scientific community is an international marketplace of ideas, where, together, scientists can achieve incredible feats. As an intern at NCI, I got a chance to contribute to the incredible research done in this international community,” she said. 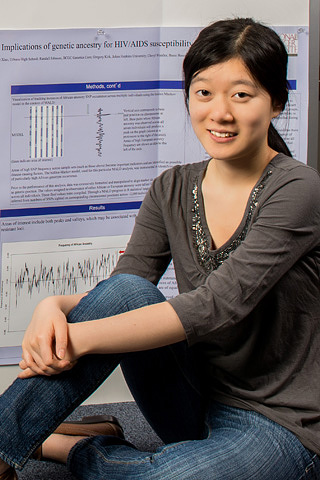 Xiao, a WHK intern in the Basic Science Program CCR Genetics Core, was awarded for her research on changes in recombinant antibodies from cord blood, healthy adults, and HIV patient data, in her project, “Deep Sequencing and Circos Analyses of Antibody Libraries Reveal Antigen-Driven Selection of Ig VH Genes during HIV-1 Infection.”

“I observed the changes in these recombinations as the body was exposed to disease pathogens and became infected with HIV,” she said.

She said her internship at NCI at Frederick has taught her resourcefulness.

“I began my internship with little to no prior knowledge about computer science, but was able to conduct a full course of research with help from very patient and knowledgeable mentors, online research, and trial-and-error troubleshooting,” she said. 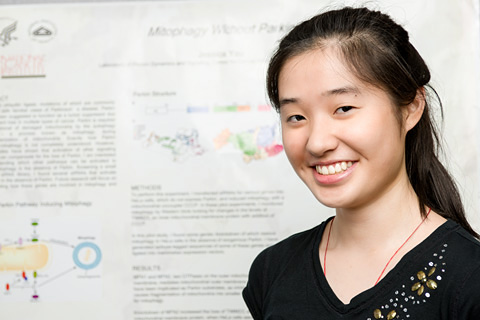 Yau’s project, “Alternative Pathway of Mitophagy Activation in the Absence of Parkin,” focused on identifying alternative signaling pathways for inducing mitophagy in the absence of Parkin. Mitophagy is the selective removal of damaged mitochondria in a cell. Defects in mitophagy can cause diseases, such as Parkinson’s disease.

Yau studied the PINK1-PARKIN pathway, which triggers mitophagy when it is induced by certain substrates. Defects in this pathway can cause mitophagy defects, which are associated with Parkinson’s disease.

Yau is a WHK student intern in the Laboratory of Protein Dynamics and Signaling, CCR, working with mentor Yien Che Tsai, Ph.D., staff scientist. She plans to major in biomedical engineering and minor in computer science as an undergraduate, and she hopes to pursue a Ph.D./M.D. in graduate school so that she can work in the field of oncology.