Sixty-one teams have been accepted into, and are now competing in, the Neuro Startup Challenge, a new collaboration established by the National Institutes of Health (NIH) with The Center for Advancing Innovation (CAI) and Heritage Provider Network, Inc.

The Neuro Startup Challenge is the second of its kind and is modeled after the Breast Cancer Startup Challenge (BCSC), which was conceived through a partnership between NCI, CAI, and the Avon Foundation for Women to accelerate the process of bringing emerging breast cancer technologies to market and to stimulate the creation of start-up businesses around the inventions.

The BCSC, established in 2013, comprised nine patented technologies from NCI and one from an Avon-funded research facility that were judged as having great promise for advancing breast cancer research in addition to being appropriate for startups. Teams of business, legal, medical/scientific, and engineering specialists, computer science students, seasoned entrepreneurs, and other industry professionals competed by creating business plans, giving live sales pitches, and making elevator speeches focused on developing and commercializing the inventions.

In March 2014, the challenge winners and finalists launched their startups, and began to raise funds and negotiate a license for their inventions. As a result of the BCSC, more than 270 challenge competitors received start-up and entrepreneurship training, 10 breast cancer–related inventions are being advanced, and 11 startups have been launched.

In November 2014, the BCSC was awarded with an Excellence in Technology Transfer Award from the Federal Laboratory Consortium for Technology Transfer (FLC) Mid-Atlantic Region. In July 2014, the new secretary of the U.S. Department of Health and Human Services (HHS), Sylvia Burwell, recognized the BCSC with a Secretary’s Pick Award in the HHS Innovates competition, which celebrates inventive new ideas in support of the HHS mission.

Given its promising initial results, the BCSC template is now being applied systematically as a model for advancing NIH-licensable technologies and helping to create start-up companies. The Neuro Startup Challenge, which centers around 16 unlicensed brain-related inventions from multiple NIH institutes, was launched using an enhanced version of the BCSC framework.

In this new challenge, 61 teams comprising graduate-level medical and business students and postdocs, as well as seasoned entrepreneurs, will compete to create strategic business plans and launch startups to develop and commercialize the inventions.

CAI is continuing its partnership role in this new challenge, and Heritage Provider Network is engaged as a philanthropic partner.

According to the Core Challenge Planning Team from the Technology Transfer Center, NCI at Frederick, and CAI, the challenge platform offers a number of significant advantages to advancing technology, including:

The Neuro Startup Challenge provides the opportunity to help accelerate and increase the volume of advancements for brain-related health concerns by building on the unique framework created with the BCSC. The challenge concept is designed to serve as a model for institutionalizing the practice of spinning off inventions across HHS and other federal labs. 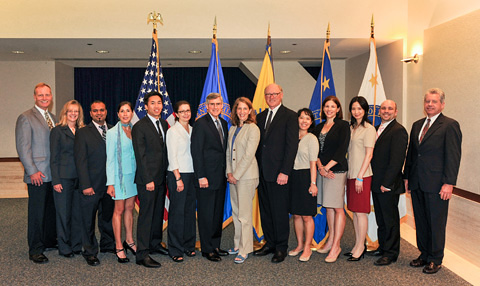