Chimeric antigen receptor (CAR) T cell therapy is a hot topic in healthcare. Successfully used to treat certain aggressive blood cancers for about a decade now, CAR T cell therapy is capturing the growing interest of oncologists who would like to harness its power to use against other cancer types. At Frederick National Laboratory (FNL), the Biopharmaceutical Development Program (BDP)—a specialized team manufacturing experimental biotherapeutics for NCI—is at the center of an effort to develop CAR T therapies that will expand cancer treatment options, particularly for pediatric malignancies.

CAR T cells are an autologous gene therapy product, meaning they’re made from the patient’s own T cells, a type of white blood cell and a component of the immune system. The patient’s T cells are collected and genetically re-engineered to express a cancer-recognizing protein on their surface, turning regular T cells into CAR T cells. These cells are then carefully multiplied under controlled conditions before being infused back into the patient, where they become cellular “soldiers” that seek out the cancer cells, bind to them, and actively destroy them.

Six FDA-approved CAR T cell treatments are available to target a handful of blood cancers in patients whose malignancies haven’t responded to treatment (known as “refractory” cancers) or have relapsed after a period of remission.

However, only one CAR T cell therapy has been approved for pediatric use: Tisagenlecleucel, which is used to treat refractory or relapsed B-cell acute lymphoblastic leukemia in children and young adults.

There’s a pressing need for additional CAR T cell options for other pediatric blood cancers, as well as for solid tumors, such as lung or pancreatic cancer. Researchers in BDP are working to address that need.

Their first product, anti-CD33 CAR T cells (CD33CART), is used in a multi-site trial that is treating young people with refractory or relapsed acute myeloid leukemia.

Jason Yovandich, Ph.D., chief of the Biological Resources Branch (BRB) in DCTD, whose group coordinates BDP’s participation in these and other early-phase trials, reports that BDP had produced 18 CD33CART doses, with 14 patients receiving infusions of their re-engineered cells, as of late July 2022. BDP also produced two GD2CART doses, one of which has been administered to a patient.

Time Is of the Essence

The samples are shipped deep-frozen at −150 ºC in temperature-controlled containers equipped with temperature, shock, and orientation sensors; GPS capabilities; and tracking software that enables BDP staff to know the samples’ location and condition in real time. The frozen CAR T cell therapy doses are delivered back to the trial site in the same specialized vessels.

This is part of a critical chain of custody and identity that is maintained for each patient T cell sample and resulting therapy. By tracking the sample from the moment it is collected to the moment the therapy is infused back into the patient, “At no point do we not know what is happening [to the sample and the CAR T cell therapy],” said Julie Blake, BDP manufacturing manager.

The goal is to have the patient’s CAR T cell therapy doses finished, tested for safety, matched with the proper approvals and paperwork, and returned to the patient’s bedside within 14 days of receiving the sample. In comparison, it typically takes BDP about three months to produce, test, and release other biotherapeutic antibodies and proteins.

To meet this tight deadline, staff from production, quality assurance (QA), and quality control (QC) must collaborate to keep the pace moving quickly. 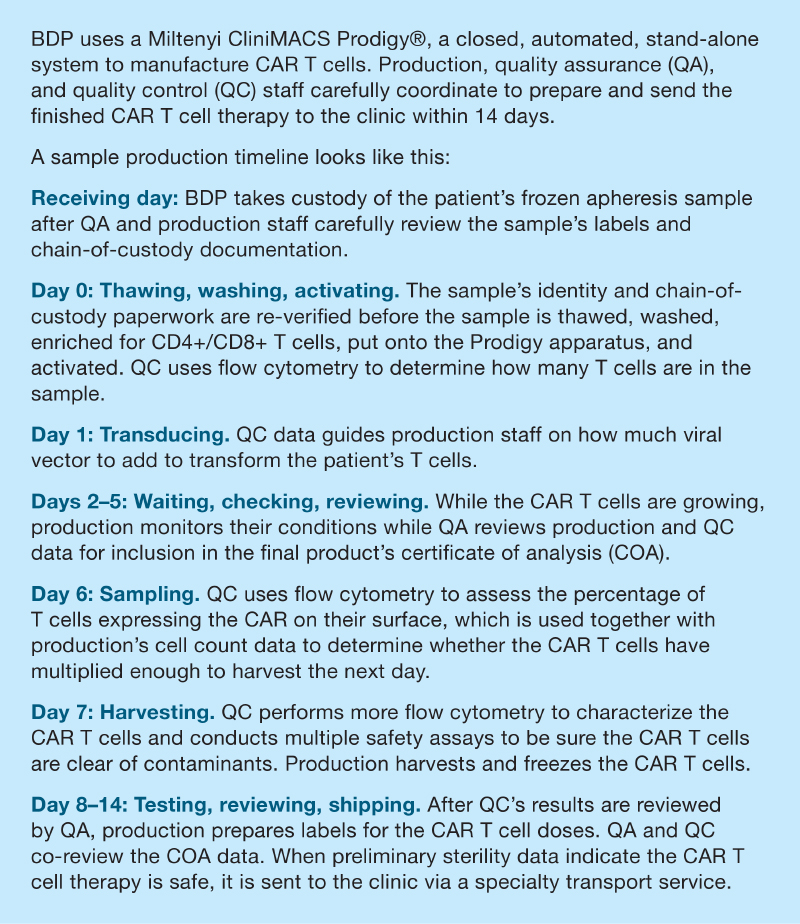 When BDP is notified of an incoming sample, staff from production, QA, and QC coordinate quickly to ensure that the assigned CAR T cell suite is clean and ready, that all reagents and supplies are on hand, that all staff have the most up-to-date training, and that the production equipment is sterile and calibrated.

Production and QA staff, most often Blake; John Roach, BDP director of manufacturing; and Marie Elena Fraley, BDP QA manager, or Noel Brightwell, BDP QA specialist, witness each sample’s arrival. They ensure the documentation and information are clear, accurate, and in accord with the paperwork and labels.

“Since this is an autologous product, it’s important that we're checking and verifying the details,” Fraley said.

This attention to detail extends to the long list of test results and paperwork that Fraley and her staff must review and verify before shepherding the documentation through the Good Manufacturing Practice (GMP) release process. An approved certificate of analysis must accompany the CAR T cell therapy doses when they are returned to the clinic.

The process is an intense, closely monitored race against time.

When Fraley joined BDP in 2019, one of her top priorities was to develop approval protocols that made sure that “we were still following all of the quality SOPs but compressed into a very short time frame.” As a result, interdepartmental communication has been streamlined because “everybody does understand that cell therapy is highest priority because we have that patient waiting.”

For every CAR T cell production run, QC performs the key assays—flow cytometry and PCR, among others—that provide the cell characterization and sterility data needed to proceed to each next step. “The objective is to be sure that everything is safe and to characterize what we've actually produced,” said Brian Bowser, Ph.D., BDP QC manager. “We have to get the right answer, but we have to get it quickly.”

Production and QA staff log and witness the apheresis sample as it is prepped and loaded onto the Miltenyi Prodigy CAR T cell manufacturing apparatus. They also oversee sample-thawing and CAR T cell harvesting. “We don't do anything without two people because you always have somebody performing and somebody verifying. You never do it alone,” said Blake.

Throughout the process, BDP remains focused on “getting things right the first time,” Blake said, adding that, in CAR T cell production, there may only be one patient T cell sample to work with. That’s why she tells new production staff, “Think of the most important person in your life when you're handling this. This is somebody's most important person.”

Yovandich and his BRB staff coordinate all the necessary activities before the patient’s T cell sample arrives at BDP, as well as those that occur once the finished CAR T cell therapy departs the facility.

BRB works with the sponsors of the clinical trials, as well as the physicians and researchers who identify and enroll the cancer patients. Meanwhile, BDP staff design, test, and implement the production platforms used for each cell therapy project so they meet GMP standards before producing the individualized CAR T cell therapy doses.

BDP staff regularly meet with Yovandich and the BRB staff during each CAR T cell therapy’s manufacture, often with the physician/principal investigator of that study in attendance, to review the latest data.

“They know what we are doing at pretty much any given time, and in return, we know we have their support to help us if we need to figure something out,” said Bowser.

Considerable production and testing costs remain some of the greatest challenges to expanding the development of new CAR T cell therapies. A single dose of some recently approved therapies can cost nearly half a million dollars.

However, through programs like the DCTD-supported NCI Experimental Therapeutics (NExT) Program, researchers and physicians who have established proof of concept can gain access to resources like the BDP to test their novel CAR T cell therapies in multicenter trial settings, said George Mitra, Ph.D., BDP director.

BDP then develops the production processes for the new CAR T cell therapies and shepherds them through the Investigational New Drug application process to obtain FDA approval for clinical trials. “Then we get into actually treating patients,” Mitra said.

The CD33CART and GD2CART therapies that BDP are producing are funded through DCTD. New BDP-initiated projects that have received DCTD and NExT Program approval include CAR T cell therapies to treat prostate cancer and mesothelioma.

However, early on, access to viral vectors was very limited, creating a bottleneck in CAR T cell research. In response, BDP developed its own lentiviral and retroviral vector platforms, which are available to researchers and physicians, according to Ray Harris, Ph.D., BRB program director, who added, “We can provide them as a stand-alone service” if their facility has the capability to make their own CAR T cell therapies.

The great interest in CAR T cell therapy generated by the successes seen in treating certain B cell leukemias and lymphomas with them has been tempered somewhat by obstacles other than the astronomical cost of production.

At this point, they are less successful for treating solid tumors. CAR T cells are usually manufactured from the patient’s T cells, which sometimes don’t transform or multiply well during production. After infusion, CAR T cells have to find their way through the body’s tissues to the solid tumor, which is often surrounded by hostile conditions that inhibit their tumor-killing activity. And, in some cases, CAR T cell treatments can trigger serious side effects.

Yet as a relatively new anticancer treatment, CAR T cell efficacy, side effects, and cost issues are expected to improve as more research groups embrace and test the technique to treat different cancers.

“CAR T cell therapies are largely in an investigational and early technologic developmental stage,” said Rachelle Salomon, Ph.D., BRB program director. “There will continue to be opportunities for optimizing and streamlining the technology, from clinical assessment of the patient through manufacturing of patient-specific therapeutics.”

Yovandich compared it to the discovery and early use of penicillin: “For many years it was difficult to produce large quantities of the drug and it was quite expensive,” until technology caught up with the science and overcame the limitations.

Challenges notwithstanding, BDP’s CAR T cell and viral vector production schedules are full, and the pace looks like it will become even busier in the near future. According to Yovandich, the NExT Program has recently seen a “significant uptick” in new vector and CAR T therapy proposals, so “we are anticipating rapid growth in [our] need for production capacity.”

With three new production suites soon to open and with seasoned, committed teams prepared to step up, there is no doubt that BDP and BRB will be ready.

Lisa Simpson is a technical editor in Scientific Publications, Graphics & Media (SPGM), where she edits corporate reports, client projects, and scientific manuscripts, and now writes for the Poster newsletter. SPGM is the creative services department and hub for editing, illustration, graphic design, formatting and multimedia training and support for NCI at Frederick and Frederick National Laboratory. 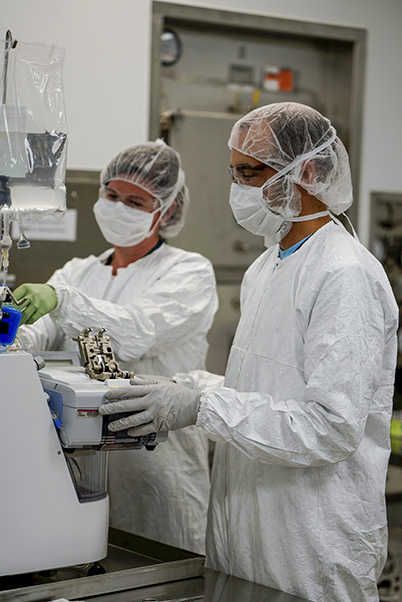 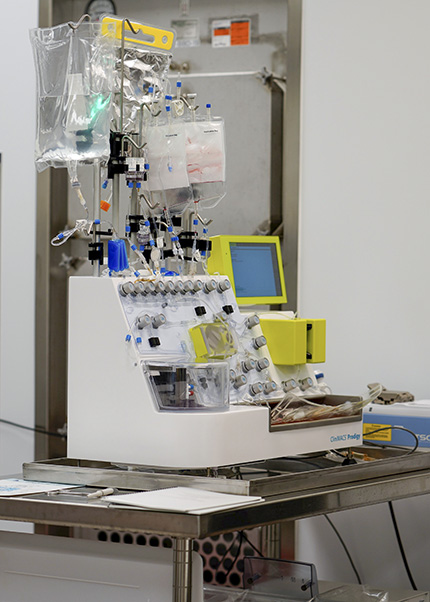 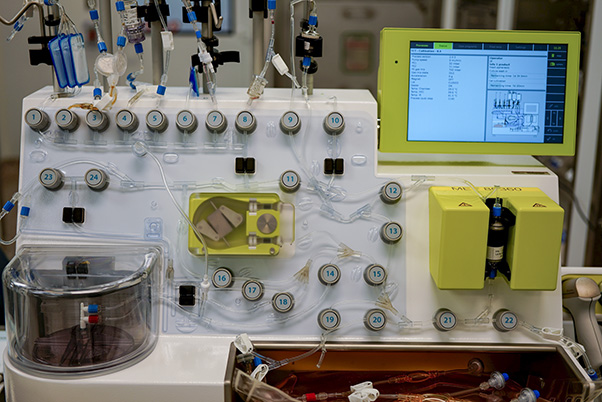 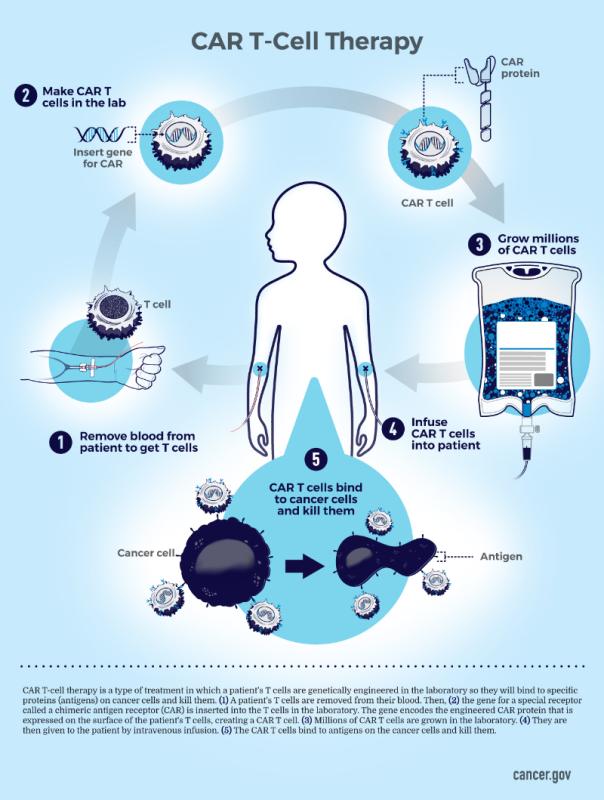