Frederick County Public School students have a unique opportunity—a chance to get a real-world, hands-on experience in biomedical science and biotechnology before they even graduate from high school, thanks to the Frederick County Career and Technology Center (CTC).

Several years ago, the CTC established its biomedical sciences program with a curriculum from Project Lead the Way (PLTW), a nonprofit, nationwide developer of science, technology, engineering, and mathematics (STEM) education in elementary, middle, and high schools. The PLTW curriculum is closely tailored to the current needs of employers in this field.

In spring 2013, the CTC’s biomedical sciences program and Kathy Koops, the main classroom instructor, were recognized by the Maryland State Department of Education, Division of Career and College Readiness, as the leading school for this type of career education in Maryland.

“Project Lead the Way developed an amazing curriculum,” Koops said. “[It] is written so that students develop the skills necessary to retrieve accurate data through literature review, perform research to accrue their own research data, and analyze and synthesize the data to arrive at an accurate diagnosis. It is so much fun to observe their delight when they arrive at a correct diagnosis.”

The only PLTW-based biomedical sciences program in Frederick County is offered by the CTC, according to the PLTW website. 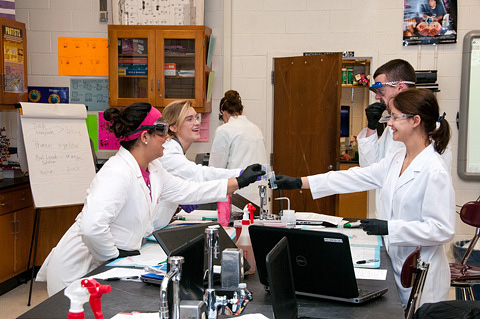 “With this kind of preparation, Frederick County students can take advantage of a rare and unique learning opportunity,” said Walter Hubert, Ph.D., assistant project officer, NCI at Frederick. “Not many high school students in the nation have a chance to work side by side with so many preeminent scientists in the biomedical sciences field.”

“The CTC’s biomedical sciences program includes both high school juniors and seniors, who attend class part-time at the CTC,” Hubert said. “Part of what makes the program so special is its almost seamless integration with the internship programs of our federal laboratories here in Frederick.”

“Pairing Frederick County students with laboratories at NCI at Frederick and USAMRIID is one of the CTC’s goals,” said Michael Concepcion, the CTC principal. Concepcion is a former instructor at the CTC and took over the reins as principal in 2013.

“Our career programs are changing, evolving, and innovating to better serve the county’s needs,” Concepcion said. “There is no better example of that innovative change than CTC offering a rigorous and relevant program like PLTW’s biomedical sciences. Employers need a workforce that is equipped for success in the global marketplace. CTC and PLTW are helping students meet that real and immediate demand of high student achievement and global competitiveness.”

Concepcion praised the award that the CTC and Koops received in 2013, saying it was “well-deserved” for a “teacher and students who work hard in tackling a rigorous curriculum.”

Sarah Hooper, nurse practitioner and manager, Occupational Health Services, would agree—her three children have successfully completed the program. Her daughter, Lauren, took the nursing skills she learned at the CTC to the next level in her education—she’s a student at the Frederick Community College Nursing School. 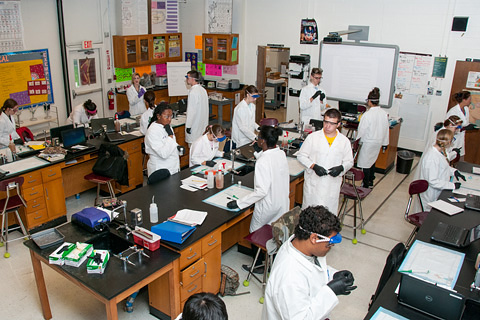 “Kathy [Koops] does an awesome job,” Hooper said, explaining that her children have learned more about their chosen fields in a shorter amount of time than she did when she was in nursing school. The program combines all aspects of a biomedical career, she said. “I’m glad my kids had the opportunity to go there.”

Koops has been with the CTC for more than 15 years, and she previously taught a pre-nursing program for 10 years. “It is so rewarding to see the students develop critical thinking skills, gain confidence as they learn cutting-edge technologies … and gradually recognize their amazing potential,” she said.

Many of the CTC graduates have continued their educations in similar fields: pre-med, biology, biochemistry, forensic science, and biomedical engineering. “It is such a privilege to be a part of this growth, and I get to relive it year after year,” Koops said. “We love having the opportunity to influence young people positively for science and medicine.”

Julie Hartman, program analyst, NCI at Frederick, has been working with educational programs such as the CTC for many years. “The Career and Technology Center is a great way to connect students with potential career paths and gives them an opportunity for real-world experience,” Hartman said.

Image captions: Students in the Frederick County Career and Technology Center biomedical sciences program extract each other’s DNA and analyze it as part of the “Test Your Own Genes” lab.