A Culinary Cornucopia at the Second Annual Ethnic Food Cook-off

Imagine traveling the globe, sampling cuisines from countries as disparate as Russia, Switzerland, India, and Ethiopia. Sounds like a dream vacation, doesn’t it? Thanks to the Employee Diversity Team (EDT) and its group of gastronomic volunteers, the NCI at Frederick community was taken on this culinary journey, gratis, at the second annual Ethnic Food Cook-off.

This year, the event was chaired by Amber Elia, financial management analyst, who took over for Andrea Frydl. Elia helped double the number of participants in this year’s event, which showcased the diverse cultures, backgrounds, and experiences of NCI at Frederick staff. Though the cook-off was not actually a competition, those who participated received gifts donated by the R&W Club Frederick, Nymeo, and Occupational Health Services.

This year’s participants cooked, baked, and sampled dishes ranging from appetizer through dessert. Myla Spencer, Ph.D., research assistant II, Genomics Laboratory, Cancer Research Technology Program, studied abroad in Valencia, Spain, for a summer during college and was inspired to bring a Spanish-style dish to the cook-off. Her warm, flaky empanadas were a hit with everyone who tried them. It was Spencer’s first year participating in the cook-off, but it will likely not be her last.

Ancy Nalli, Ph.D., a postdoc in the Molecular Targets Laboratory, cooked a classic Indian dish, chicken dum biryani, that turned out to be a huge crowd pleaser—Nalli’s dish was all but devoured within the first fifteen minutes of the event.

Randy Johnson, Ph.D., technical project manager, Data Science and Information Technology Program, baked his take on braided Swiss bread, otherwise known as zopf. Johnson spent two years in Switzerland and south Germany on a church mission trip in the 1990s, and, according to him, “zopf can be found in pretty much every little store and market place.” Johnson got his recipe from “a little old Swiss lady,” and while he admits the bread can be a little plain on its own, it quickly becomes a treat when paired with a hunk of Swiss cheese.

Helene Highbarger, associate scientist, Virus Isolation and Serology Laboratory, provided an Ethiopian spread with injera, misr wat (red lentils), doro wat (chicken stew), and a few other delicious accoutrements. As is customary, the injera is used as a utensil to pick up the rest of the food, rather than a fork or spoon.

At the next table, Walter Hubert, Ph.D., assistant project officer, Office of Scientific Operations, showcased pelmeni, Russian dumplings that are “related to tortellini,” which were stuffed with beef, pork, and onions. The combination of beef and pork provides a better flavor and texture, according to Hubert. The dumplings, traditionally served with sour cream, would be the perfect comfort food on a cold winter night.

Not wanting the U.S. of A. to be left out of the fun, Robert Gutheridge, web programmer, and Jack Rentschler, administrative support, provided some distinctly American fare. Gutheridge brought his take on stuffed peppers, which were filled with ground beef and crumbled Doritos. For dessert, Rentschler whipped up a batch of smooth, creamy peanut butter fudge. The recipe, according to Rentschler, involved “brown sugar, confectioners sugar, and some more sugar.”

Finally, Elia brought her take on Italian rice pudding, based on her grandmother’s recipe. Elia’s great grandparents were Italian, and rice pudding—along with cheesecake and pizzelles—was a staple at all family holiday gatherings. The recipe comprised equal parts rice and milk, with some sweetened condensed milk and a dash of vanilla for taste.

To see the complete recipes from this year’s participants, visit the EDT cook-off page here. If you would like more information about the EDT, what they do, and how you can participate, check out the team’s website, or send an e-mail to FrederickDiversity@mail.nih.gov. 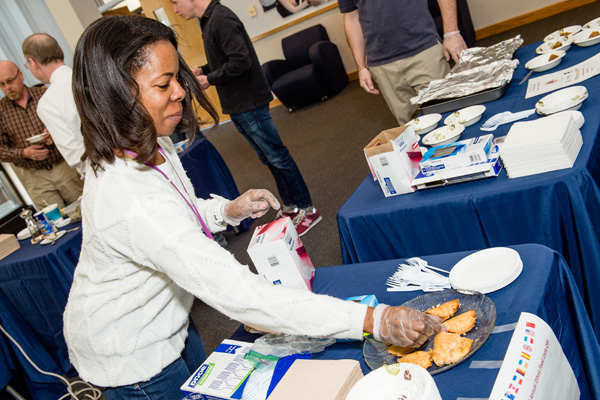 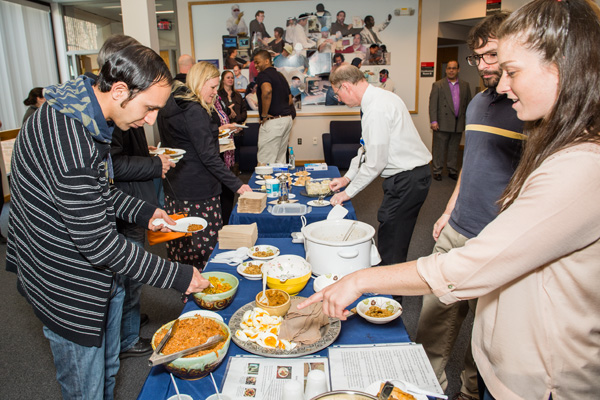