Robin Winkler-Pickett has known Jim Cherry, Ph.D., scientific program director, and Craig Reynolds, Ph.D., director, Office of Scientific Operations, both NCI at Frederick, for many years. “We’ve been friends for a long time.”

So when she heard about the chance to dunk each of them at Take Your Child to Work Day (TYCTWD) on June 25, Winkler-Pickett, a research biologist in the Laboratory of Experimental Immunology, NCI Center for Cancer Research, knew she had to make time to participate.

The annual event brings children ages 6 to 13 to the NCI Campus at Frederick to learn about what their parents do, as well as encourage them to pursue careers in science and health care. This year, more than 250 children registered, and 208 attended the event.

TYCTWD affords hands-on opportunities for children to learn about the scientific research conducted at NCI at Frederick through a variety of fun and educational programs. One such program, “Drugs from Bugs, Shrubs, and Slugs,” teaches kids how samples collected from nature are extracted and tested to isolate and identify new drugs.

This year’s event offered 16 programs, and participants could register for up to three sessions, depending on their preferences and schedules.

NCI at Frederick has hosted TYCTWD for nearly 20 years, and the “Drugs from Bugs, Shrubs, and Slugs” program has been around for at least 12 of those years, according to John Britt, programmer analyst III in the Natural Products Support Group, Leidos Biomedical Research. He said he hoped the 20 or so children, plus adults, who attended his lab’s program learned “the importance of and how we are discovering drugs from nature.”

TYCTWD also offers activities in both indoor and outdoor settings known as Hub activities. At the indoor Hub, children could choose from a diverse array of activities, such as grabbing a free Rita’s Italian ice, courtesy of Nymeo, having their photos taken, courtesy of Scientific Publications, Graphics & Media, learning how to use scientific procedures to extract banana DNA in a test tube, or learning about and using a Braille machine at the Employee Diversity Team’s (EDT’s) booth. 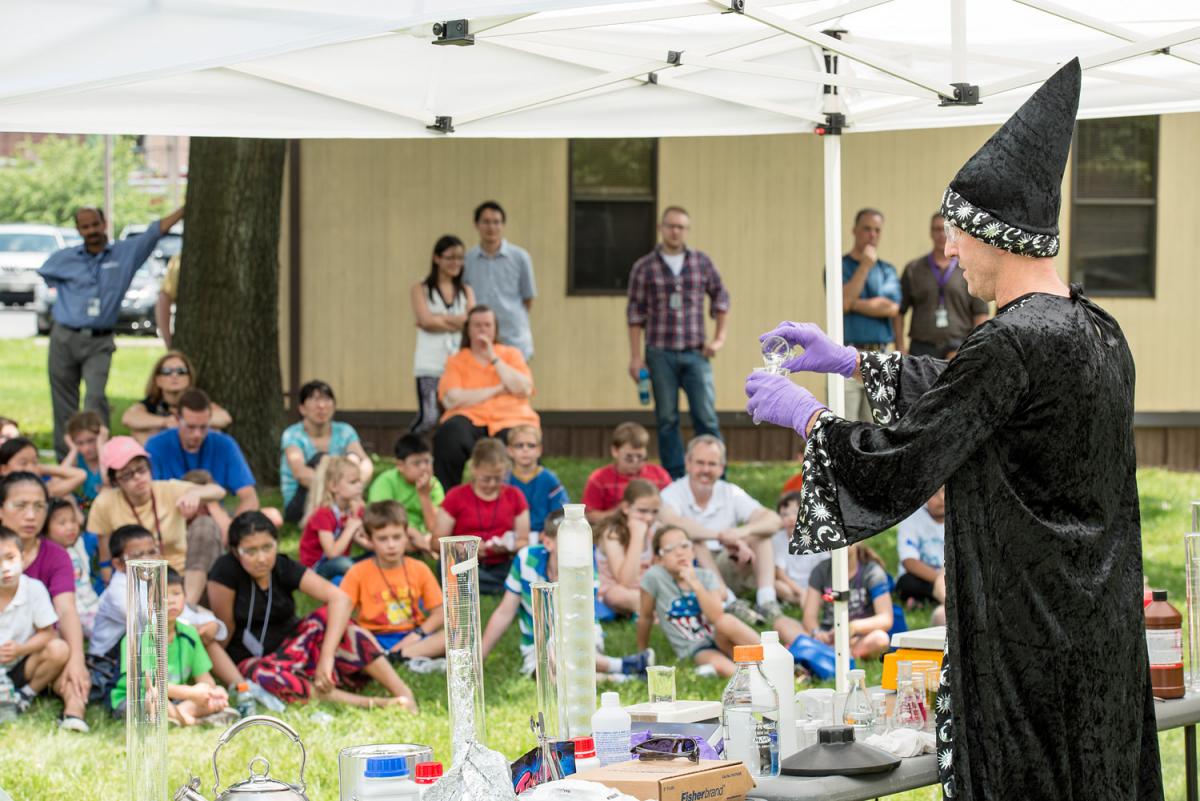 e has a personal connection—her four-year-old son was born completely blind. “As we go about life with his disability, I am reminded every day how scary blindness can be to others around us,” Elia said. “So raising awareness has become a goal of mine.”

Elia said both kids and parents enjoyed using the Braille machine and asking questions about the other items on display. “Most people mistook the Perkins Brailler for an old-fashioned typewriter and many people were afraid of breaking it, so most parents shied their kids away from it,” Elia said, referring to one of the items the EDT booth had on display. Elia said she expected kids and parents would want to play with the machine. “[It’s] nearly indestructible and made out of metal,” she said. “But that is what raising awareness is for.”

New to the outdoor Hub was the Dunk Tank hosted by R&W Club Frederick, which used the opportunity to raise funds for the NIH Friends of the Clinical Center (FOCC) organization that provides emergency services to assist patients in NIH clinical research studies. Kids could try their luck at dunking a volunteer for free, but adults had to pay $5 for three throws. Donations between $5 and $10 allowed participants to stand closer to the target. If they donated $10 or more, participants could walk right up and dunk the volunteer.

The Dunk Tank fundraiser was on Winkler-Pickett’s to-do list for TYCTWD. She said she arrived too late to dunk Cherry during his shift, but she did get a chance to dunk Reynolds. “I said, ‘I’ll double the [donated] money if Jim gets back up there,’” Winkler-Pickett said with a laugh. Cherry was a good sport, climbing back into the tank so Winkler-Pickett could dunk him. Dunking both Cherry and Reynolds five times each, she ended up giving the highest single donation of the day. 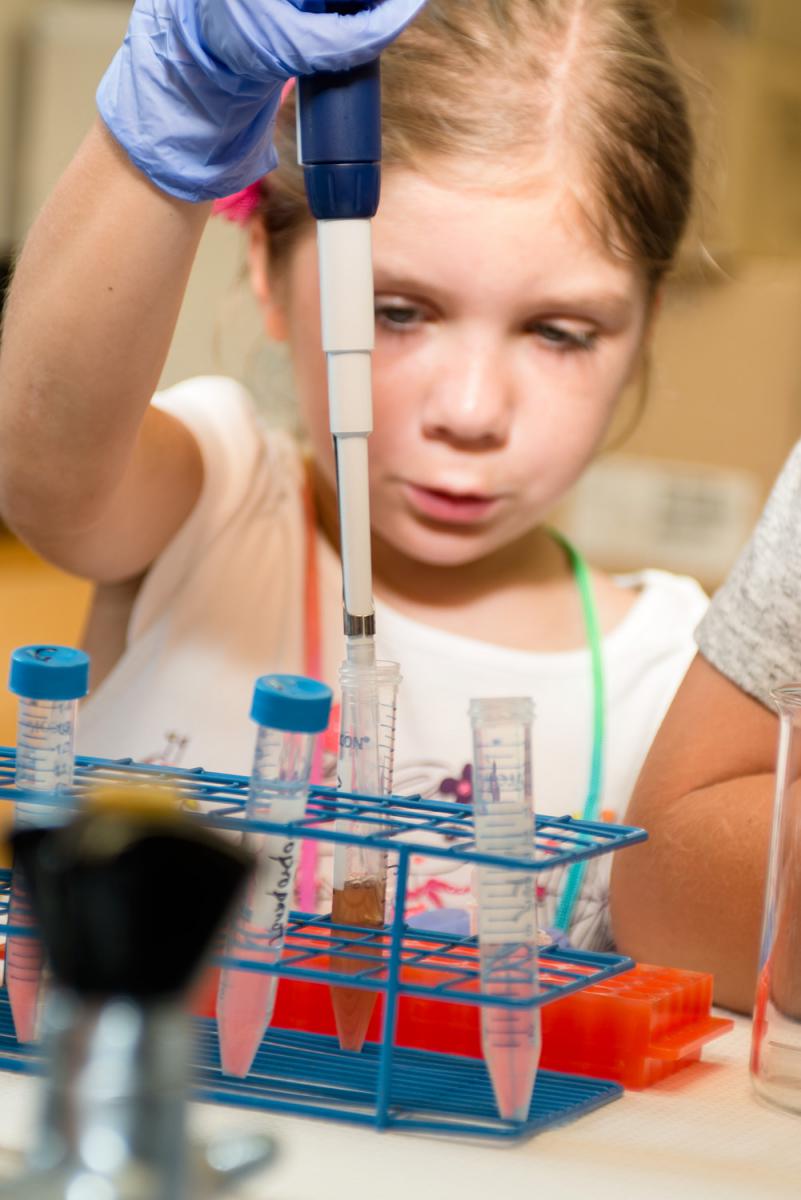 Both kids and adults got into the spirit of the tank. Cherry said he enjoyed the looks on the kids’ faces—as well as Winkler-Pickett’s—when the volunteers splashed into the tank.

Heimbrook agreed. He said he loved to see “the enthusiasm that the kids brought—they really enjoyed it!” Some kids dunked Heimbrook three or four times, he said.

Many of those who volunteered to be dunked wanted to help the FOCC. “It’s always nice to be able to help a good cause,” Racheff said.

The tank brought in about $500 for the FOCC—about $490 and 250 pesos (a little under $20). “It was much more successful than expected,” said Melissa Porter, administrative manager, Office of Scientific Operations, and vice chair of R&W Club Frederick.

The volunteers agreed that TYCTWD is an important event for the NCI at Frederick community because it brings people together to learn and have fun, and, hopefully, to inspire the next generation of scientific researchers. “Getting kids involved in math and sciences is vital for our future,” Gannon-Miller said.

Carpenter agreed. “It’s important for kids to see what their parents are doing when out of the house and at work,” he said.

“We have amazing people here that work very hard every day to help the NCI achieve its mission,” Cherry said. “It is nice to have a couple days…where we can come out of work places and socialize a bit. With the young kids on campus, it brings a pure excitement to our facility, and it also reminds us all why what we do is so important.”

View a video of the dunk tank activities on Facebook.