With Expertise and Enthusiasm, SeroNet’s Hub Surges Ahead

The past year for Ligia Pinto, Ph.D., and her staff has been full of pressure and remote meetings at all hours of the day and night. It’s also been one of partnerships and progress.

Pinto heads the Vaccine, Immunity, and Cancer Directorate, the group at the Frederick National Laboratory that’s leading the national SARS-CoV-2 Serological Sciences Network (SeroNet). At this time last year, her laboratories, which specialized in human papillomavirus, antibody science, and serology, had just been asked to help the Food and Drug Administration evaluate the quality of the new SARS-CoV-2 antibody tests that were flooding the market.

Now, they’re at the center of the U.S. response to serology and testing in the pandemic, the heart of a large nationwide collaboration for increasing serological testing and understanding the immune system’s response to SARS-CoV-2 infection and vaccines.

“It’s really exciting. Sometimes it feels like a dream because, I think, as biomedical scientists, we always want our science to really have an impact on public health,” Pinto said.

They’re leaving a mark so far. In less than a year, they’ve added a group dedicated to SARS-CoV-2 serology; taken the helm at the SeroNet Coordinating Center, a diverse organization that collaborates with the National Cancer Institute and SeroNet’s 25 participating institutions to shepherd efforts; and helped establish the Clinical and Translational Serology Task Force, a national partnership that seeks to apply lessons about SARS-CoV-2 serology learned in the laboratory to clinical trials and for public health benefit.

Pinto’s staff has evaluated more than 100 commercial serology tests, a substantial number given the time and effort such evaluations require, and they custom-built the assays to create panels to perform these evaluations in just a few weeks in 2020. They’ve also produced the U.S. Serology Standard, a tool that they encourage scientists to use in any serology study so results can be compared across different studies and vaccines. It is available for request online.

Their other standards, including panels that allow scientists to validate their own tests, have been distributed to SeroNet and other institutions, a collection of government, industry, and academic groups around the U.S.

“Everyone came into this effort bringing their best,” said Bo Park, the directorate’s administrative director.

Collaboration at the Center of Success

While the staff has taken their place among the success stories, Pinto is quick to note that they haven’t done it alone.

“The timelines were remarkable,” she said. “I can’t say enough about the power of people actually being aligned toward the same goal and fighting the pandemic together.”

Pinto points to the evaluation of serology tests as one example. That effort is a partnership between NCI, the Frederick National Laboratory, the Food and Drug Administration, the Centers for Disease Control and Prevention, the National Institute of Allergy and Infectious Diseases, the Biomedical Advanced Research and Development Authority, and several academic groups. Her laboratory does most of the testing, but their collaborators’ resources and knowledge have been crucial to success.

SeroNet is another example. It’s a network that can’t exist without the 25 partner institutions. The Clinical and Translational Serology Task Force is similar.

“That’s really the landscape under the task force: bringing all of these individuals together and different perspectives together in real-life time to try to tackle … what is an issue today and how can we actually accelerate translation of laboratory findings into public health benefit,” Pinto said.

‘This Really Is about Fight’

Naturally, such far-reaching efforts to combat a public health emergency come with added responsibility and a deep sense of gravitas, but there’s a strong sense of commitment, too.

“Ligia doesn’t sleep. I saw her emails [from] 11 o’clock on Sunday night, so it’s not just a weeknight that these things are happening. The work is happening around the clock, and there’s really no workday or weekend. This really is about fight,” Park said.

Pinto sees the same level of dedication from everyone involved—her team, their partners, and the groups supporting them. Staff and collaborators across the U.S. and the globe have had early mornings or pulled late nights so they can interact in real time. Groups that previously had less frequent contact are now working closely and readily sharing resources and methods. In several ways, it reminds her of working on the HIV epidemic early in her career: everyone was all in, and no contribution was too small.

“We felt that we had a responsibility as scientists to do something in our hands, whatever it was. … [And] administrative [support] was critical. Everything, everyone—they were critical,” she said. “The individuals that are in Security [now], allowing us to be here—all that infrastructure support and everybody willing to work together is really amazing.”

For those working on SeroNet and the related initiatives, that chance to make a difference makes the stress and long hours worthwhile. There’s an undeniable enthusiasm married with their expertise underlying may of their successes so far, and it’s an encouraging indicator of what’s to come.

“We all really feel that we have a responsibility to use anything, all our knowledge, to try to translate to fight against something that is this important at this moment,” Pinto said. 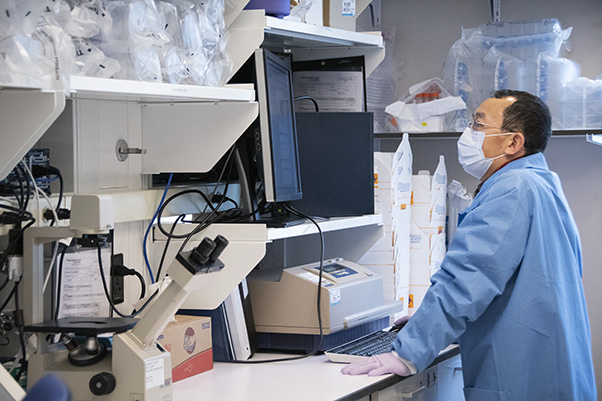