FNL Volunteers Offer Excitement and Knowledge at In The Street Festival

Sporadic downpours drenched Frederick’s In The Street festival this year, but they failed to dampen the spirits of the thousands of people who attended, including the volunteers at the Frederick National Laboratory (FNL) tent.

There, staff from FNL and NCI at Frederick enthusiastically chatted with passersby, even after the weather demanded some improvisation. Rain flooded part of the street, while strong gusts nearly knocked over the tent and forced the volunteers to take down the backdrop for the photo booth—a favorite among visitors.

Nevertheless, the fun persisted. Visitors of all ages put on lab coats, held lab-themed props, and posed for a Polaroid, the absence of a backdrop notwithstanding. Meanwhile, the young and the young at heart lined up to play the tent’s spinner game and win prizes that included light-up yo-yos, tops, Leidos keychains, and FNL-branded sunscreen.

Some visitors proved to be familiar faces, such as father and daughter Stephen and Suzanne Thibeault, whose fond memories of last year’s photo booth prompted them to stop by again.

“It was coincidence that we came here on the street festival last year, and we made a point of coming back this year for my wife’s birthday because this is just a cool thing to do,” Stephen said.

“The same thing happened [as last year],” Suzanne added. “My mom went to go get something from the car; me and my dad came here; and you guys were super-friendly, asked if we wanted a photo, got us all dressed up in our lab coats, … and took our photo. It just kind of captured our year.”

After their photo, the Thibeaults learned about FNL’s work on cancer, HIV/AIDS, and infectious diseases. Like many who visited the tent, they know someone who is battling cancer, and they expressed their appreciation for FNL’s efforts to preserve public health.

“It’s important for people to know how complicated these things are,” Stephen said, citing the public’s panic during the 2014 Ebola crisis. “It just struck me that nobody was acknowledging that people are experts in this and they spend all week, every week focusing on how these diseases are detected and how they are spread, and the first thing [that people] should be doing is finding out what they have to say.”

Educating visitors proved to be the most important—and the most worthwhile—moments of the day.

Until rain compelled the volunteers to stow most paper-based items, a table in the tent had displayed pamphlets about FNL, exercise and diet planners, bilingual fact sheets on blood pressure, and recipe books. The volunteers described FNL’s mission and discussed the connection between science and good health. Visitors included former NCI at Frederick interns; Craig Reynolds, Ph.D., former NCI associate director for Frederick, and his wife; staff from Becton Dickinson and Thermo Fisher Scientific; and a candidate for the Maryland House of Delegates.

“I am really impressed at just the amount of people that are very open and wanting to hear about us,” said first-time volunteer Maggie Scully, Ph.D., senior strategic business development analyst, Partnership Development Office, FNL.

Some visitors shared stories of cancer-related triumphs and tragedies. One former Frederick resident won a prize at the spinner game then stepped aside to explain that she had lost several close family members to cancer and showed the cancer bracelet she wears in their memory. Another visitor revealed that both her father and brother had succumbed to glioblastoma, but she was excited to hear about FNL’s work on difficult cancers.

The uniting theme among most of the conversations, however, was hope. For visitors, that meant getting to hear firsthand about recent advances in scientific research. For the volunteers, it meant a renewed sense of camaraderie and a reminder that FNL has helped to ease suffering.

“I feel fortunate to do this and represent a great organization like this,” Scully said. “I’m proud to work at FNL, so it’s great to be out here and tell people what we do and that we exist and that we’re here to help.” 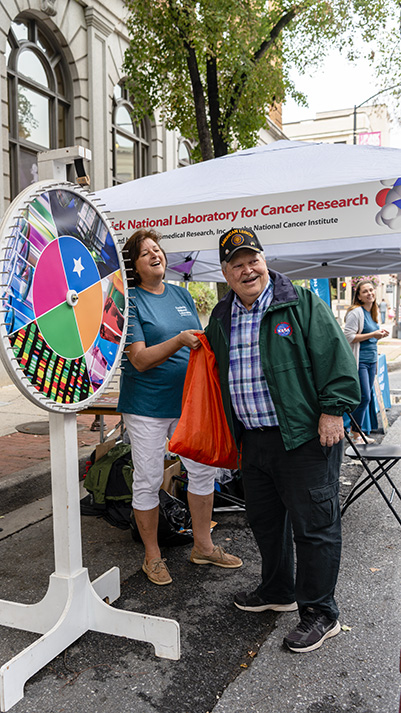 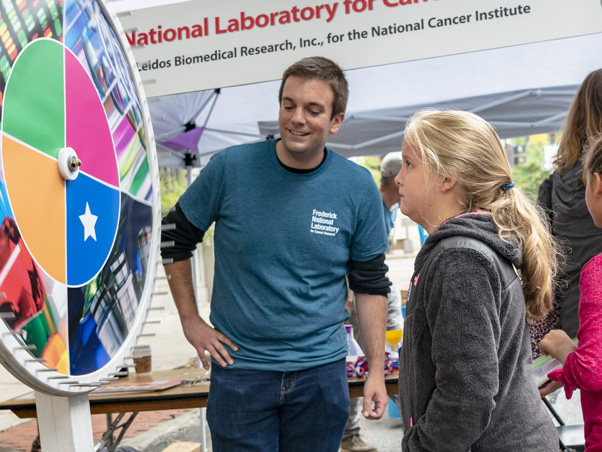 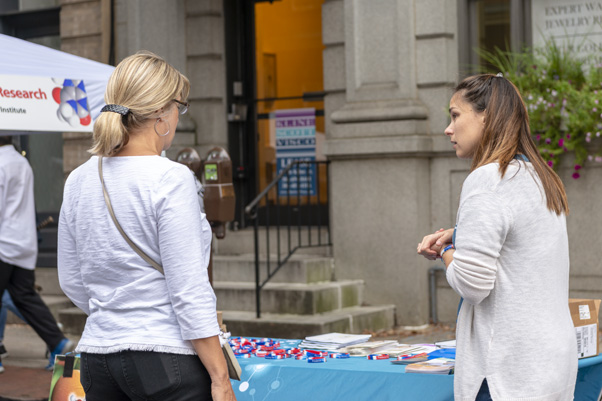 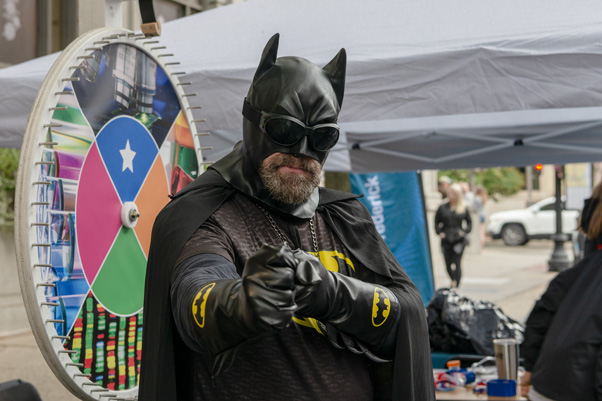