Scientists and professionals from multiple governmental agencies recently gathered at NCI at Frederick for a forum on newly emerging infectious diseases, threats to public health, and ongoing efforts to study high-risk pathogens.

During the one-day event, which was sponsored by the National Interagency Confederation for Biological Research’s Scientific Interaction Subcommittee, nine speakers from four agencies shared their research and their agencies’ endeavors to address current and future biological threats.

Much of the exchange focused on pathogens that represent emerging infections, such as Ebola and Zika virus; potential bioterrorism targets; preventive treatments; and the life cycles of bacteria and viruses. Some speakers also reviewed the measures taken by governmental agencies in response to biothreats, said NCI at Frederick scientist and Scientific Interaction Subcommittee representative Howard Young, Ph.D.

Ted Pierson, Ph.D., chief of NIAID’s Laboratory of Viral Diseases, began the day by describing his group’s research into how human antibodies neutralize Flavivirus, a genus of viruses that includes Zika, dengue, and yellow fever.

According to Pierson, using antibodies—like those stimulated by vaccines—to protect against a Flavivirus infection is like trying to hit “a moving target” because the viruses’ structures change as they mature. Consequently, the antibodies developed in response to the latent virus in a vaccine may be effective against certain maturities of invading virus but nearly useless against others. Targeting these viruses more efficiently may be a matter of timing antibody responses to a certain viral stage, or it may require methods to develop an immune response to harder-to-reach but more stable areas of the viral particles.

Next, Barney Graham, M.D., Ph.D., deputy director of NIAID’s Vaccine Research Center, took to the podium to discuss both traditional and new approaches to pandemic-level biothreats. He argued that modern biothreats emerge and spread too quickly for traditional responses to handle, underscoring the need for the faster creation of more effective vaccines.

Toward that end, Graham has been targeting viral fusion proteins—parts of viruses that allow them to fuse with host cells—with antibodies that neutralize the virus. Though the method has had mixed results, he believes ongoing advances in structural biology will improve the use of viral structure to develop better vaccines. He also mentioned that vaccine production time may be diminished with new concepts like synthetic vaccinology, which uses manufactured antigens instead of ones from latent pathogens.

A Better Way to Model Infections

The conversation then shifted to modeling diseases in living organisms as Darci Smith, Ph.D., principal investigator, Virology Division, USAMRIID, presented her group’s research. She explained that, to create more potent vaccines and identify immune-privileged sites where viruses may persist, scientists need models that faithfully reproduce the course of an infection in humans. She then described how her team is working to meet that need by developing a mouse model of human Zika infections.

The morning concluded with Farooq Nasar, Ph.D., also of USAMRIID’s Virology Division, who spoke about the value of using “state-of-the-art” telemetry to study macaque models of encephalitic alphaviruses, a group of pathogens that cause encephalitis in the host.

Nasar believes telemetry brings multiple advantages to studies of diseases and vaccines. As an example, he described his team’s study that employed the technique to evaluate the severity of Eastern equine encephalitis virus in macaques via nine different factors.

His group also performed several vaccine efficacy studies, including an investigation of a vaccine that simultaneously targets multiple alphaviruses. While the vaccines demonstrated mixed results, telemetry allowed the team to see not just whether the vaccines worked but also how they functioned, valuable information that is unavailable with more traditional investigation techniques.

After a recess for lunch, the attendees reconvened for the forum’s afternoon session. First to speak was Brooke Courtney, J.D., M.P.H., senior regulatory counsel, U.S. Food and Drug Administration (FDA), who described the FDA’s role in addressing public health emergencies.

The FDA has many regulatory mechanisms to prepare for high-level biothreats, but Courtney explained that an Emergency Use Authorization (EUA)—a temporary approval for medical professionals to use a yet-unapproved drug or treatment—is one of the most common. In addition to allowing access to otherwise-unavailable treatments, EUAs give the medical community more flexibility in managing a crisis because they can be issued in advance of an emergency and modified as events unfold.

Victoria Wahl, Ph.D., a scientist with the National Biological Threat Characterization Center (NBTCC), National Biodefense Analysis and Countermeasures Center, spoke next about the NBTCC’s role in addressing the 2014 Ebola outbreak. Her team studied the lifespan of Ebola virus on surfaces that had been exposed to a patient’s bodily fluids, as well as clinical disinfectants’ ability to remove the virus. They discovered that the virus persists longest in dried blood in hot, humid climates and that only a few compounds could adequately disinfect it.

In response to the study, the U.S. Coast Guard and the Federal Bureau of Investigation changed their disinfectants and protocols for areas with potential Ebola exposure, which Wahl believes—along with the NBTCC’s ability to perform similar tests—is just as important as the actual results.

Ebola was also the subject of the following lecture by Christopher Cooper, Ph.D., Molecular and Translational Sciences, USAMRIID, whose group is studying the human immune system’s reaction to experimental Ebola vaccines. Recently, they have determined which antibody-producing immune cell clones respond to specific antigens on the Ebola virus particles, and they further traced the lineage of those clones to understand how they developed. Cooper argued that the combined information could be used to reevaluate how current vaccines function and design better ones.

The afternoon’s penultimate speaker, Louis Altamura, Ph.D., Diagnostic Systems Development, USAMRIID, discussed using biomarkers—biological molecules that can indicate the presence of an abnormality or disease—to diagnose an infected patient before or soon after symptoms manifest, as well as to predict the severity of the infection.

Such a screen, he said, could be used by individuals in biothreat areas who may contract a disease without realizing it. Once screened, they could remove themselves from the area and submit themselves for treatment before their condition deteriorates.

Thomas Bocan, Ph.D., Molecular and Translational Sciences, USAMRIID, concluded the forum with a lecture on in vivo imaging techniques, such as positron emission tomography (PET), that can be used to study infectious diseases.

According to Bocan, PET is particularly well-suited for this purpose because its radiolabeled tags, which are commonly used in other procedures, can easily be added to many therapeutic drugs and pathogen cells. In the subsequent PET images, the drugs and pathogens will appear as bright spots, showing where they congregate in the host. A series of scans over a long period can also display how long the pathogens and drugs remain in the host’s body. Finally, researchers and clinicians could use the data to reexamine the potency and accuracy of current or experimental drugs and therapeutic approaches and improve treatment strategies.

In total, the forum represented a concerted effort to tackle the enormous challenge of rapidly emerging health threats and provided a critical opportunity to facilitate scientific conversation and develop new collaborations. 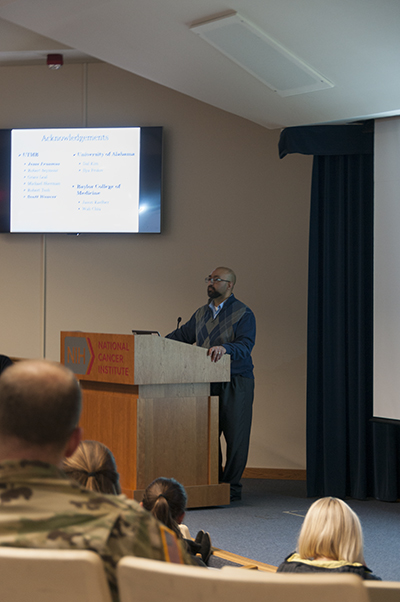