The main campus of the National Cancer Institute (NCI) at Frederick is an island of sorts: 68 acres of land that was once part of Fort Detrick.

Accessing NCI property means passing through the Fort Detrick gates and crossing the post. While the campus is surrounded by the military installation, is protected by NIH police, and doesn’t allow the use of tobacco products, it is not a part of the military.

But as we’re surrounded by the traditions and rules of military life, there are steps we can take to be good neighbors.

Following the Rules (and Avoiding Fines)

“The Army is an organization that instills pride in its members because of its history, mission, capabilities, and the respect it has earned in the service of the nation,” said Garrison Command Sgt. Maj. Franklin D. Jordan. “A reflection of that pride is visible in the customs, courtesies, and traditions the Army holds. Adherence to them connects us with soldiers throughout America's history. We have a lot to be thankful for and must remember those that served before and by keeping those traditions alive.”

As the Poster reported last June, Fort Detrick officials say that service members and civilians alike should pause to observe the ceremonies of “Reveille” at 6:30 a.m. and “Retreat” at 5:00 p.m.

Civilians on military property are asked to face the flag (or the direction of the bugle call) and place their right hands over their hearts. That goes for those driving, too—drivers should safely pull over and exit their vehicles. Military police cars and officers at some key intersections even make sure drivers stop.

Speaking of military police, you’re likely to find that rules are rules, and you shouldn’t expect to walk away with a warning. This includes speed limits, full stops at stop signs, and yielding for pedestrians in crosswalks.

Pedestrians aren’t immune to rules, either. Using crosswalks on the post is not optional. Wearing headphones or earbuds while walking anywhere except on a jogging track or path around the perimeter of the post can earn you a $60 fine. That rule pertains to cyclists, too, who can also receive a fine for not wearing a helmet.

So now that we’ve helped you avoid a fine, what about courtesies, like the salute?

Military members have to follow more than a few rules about when to salute, who salutes whom (the more junior service member initiates the exchange of salutes), when not to salute (indoors), and who they don’t have to salute: you.

Civilians are exempt from being saluted, unless you are the President of the United States. Should, say, a young, over-exuberant soldier flash a salute your way, you need not respond in kind. (Just for fun, you might also want to know it’s a faux pas for anyone to return a salute while holding anything—like a dog or a cup of coffee, as two recent presidents have learned.)

Also be aware that many soldiers will refer to you as “sir” or “ma’am.” It’s not that you’re old, it’s simply a sign of respect.

Because Fort Detrick is, for all intents and purposes, a small city, it has a number of amenities. Some, like the commissary, are for active duty military members and their families, along with military retirees, only. Others have more open policies.

The Post Exchange, for example, is principally for the military, including the military clothing store, the liquor store (Class VI, in military parlance), the gas station, the barber shop, and the cleaners. However, we civilians can purchase snacks, candy, food, and soft drinks in the Post Exchange, and the Burger King and Subway restaurants are open for all.

If you like your recreational activities around the corner from where you work, Fort Detrick has some options for you. Civilians are welcome at the bowling center. It’s just a four-lane operation, but you can get shoes and an adult beverage, and let the automatic scoring system keep track of your game.

The fitness center is also available to federal employees, as well as the Nallin Farm Recreational Area for private parties, picnics, and special events. You can purchase an individual season pass to the outdoor pool and brush up your golf skills on the driving range, or hunt for hidden treasures at the thrift shop.

And, if a really short commute interests you, some housing in the privately operated Balfour Beatty community on the post is open to federal employees, as well.

Finally, it does bear remembering that if you want unfettered access to every Fort Detrick amenity, there is one avenue you might want to pursue: Enlist. 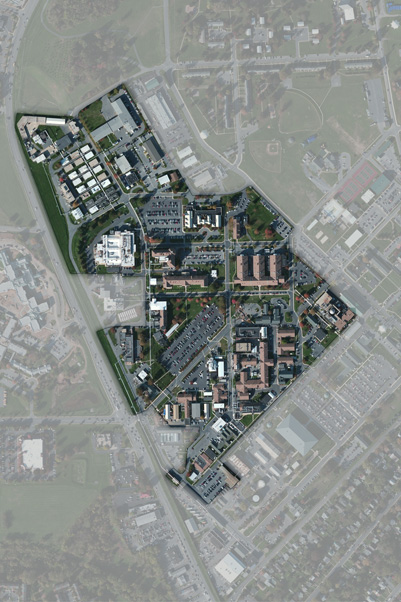