Antibody domains are emerging as promising biopharmaceuticals because of their relatively small size compared to full-sized antibodies, which are too large to effectively penetrate tumors and bind to sterically restricted therapeutic targets.

In an article published in The Journal of Biological Chemistry, Tianlei Ying, Ph.D., Dimiter Dimitrov, Ph.D., and their colleagues in the Protein Interactions Group, Cancer and Inflammation Program, Center for Cancer Research, reported their design of a novel antibody domain, monomeric CH3 (mCH3).

mCH3 is very small, at 1/10th the molecular weight of a full-sized antibody, which “may allow for superior access to targets compared to full-sized antibodies and larger, fragment-based therapeutics,” Ying said.

mCH3 also has a relatively long half-life because of its interaction with the neonatal Fc receptor. The neonatal Fc receptor binds to immunoglobulin G1 (IgG1), the antibody isotype from which mCH3 is generated, and protects IgG1 from lysosomal degradation. mCH3 is similarly protected, which results in its relatively long half-life. Most current antibody domains have very short half-lives and are quickly eliminated from the body in several hours or minutes.

In future studies, mCH3 will serve as a building block to generate antigen binders with greatly enhanced half-lives, Ying said. These antigen binders, which can recognize and bind to therapeutic targets, will remain in the human body for much longer than most current antibody domains and fragments, making them more effective as novel therapeutics.

ors is a major obstacle in cancer therapy,” Ying said.

Ying received his Ph.D. from Fudan University in Shanghai, China, and decided to devote himself to the field of therapeutic antibodies. He began working as a postdoctoral fellow at the NCI Center for Cancer Research in 2010. 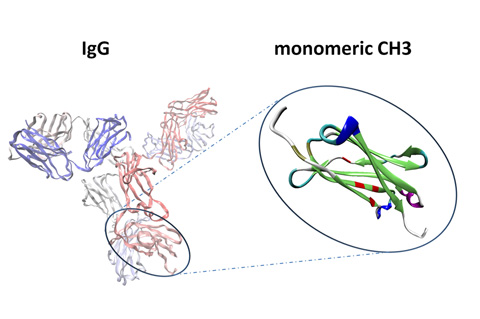 Figure caption. Schematic representation of the generation of monomeric CH3 from IgG1, the most abundant antibody isotype. The mutated residues located at the CH3 dimerization interface (residues 351, 366, 368, and 395) in monomeric CH3 are colored red.