After being down by a point in the morning, NCI reclaimed the Defelice Cup trophy from Leidos Biomedical Research, with a final score of 12 ½ to 11 ½, at the ninth annual Ronald H. Defelice Golf Tournament, held Oct. 13.

“The tightest matches in the nine-year history of this cup competition resulted in a narrow victory for NCI and allowed NCI to take a 5–4 victory total,” said Denny Dougherty, one of the team captains for Leidos Biomed and a retired senior subcontracts advisor at what was formerly SAIC-Frederick.

Sixteen players on each team battled it out at the Rattlewood Golf Course in Mount Airy, Md.

“Congratulations to the NCI team for emerging victorious,” said Leidos Biomed President Dave Heimbrook, Ph.D., who also served as a team captain. “Hopefully NCI will keep the trophy polished and filled with candy until it returns to us next fall.” 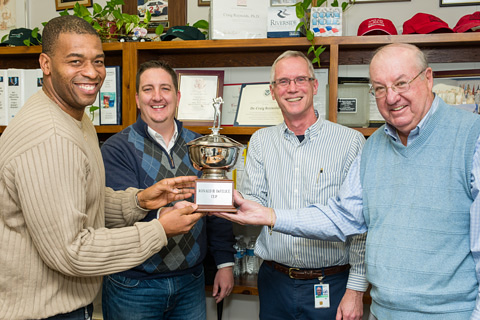 “Having all the guys, both Leidos Biomed and NCI, together at lunch and talking about the morning team matches was great,” Cherry said.

“Even with the bad weather everyone seemed to have a great time,” Foltz said.

The tournament is named after Ronald H. Defelice, retired chief of the Management Operations and Support Branch, NCI at Frederick. He hit the ceremonial first drive of the tournament. 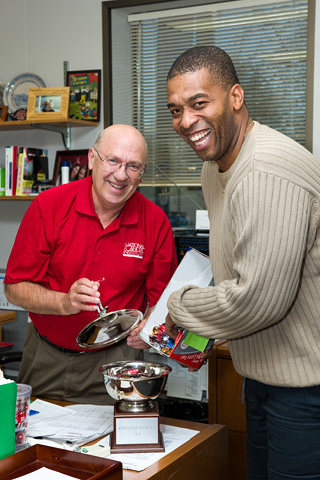