Beginning in September, phones at the NCI Campus at Frederick will begin to be replaced, as the project to upgrade the current phone system ramps up.

Over the next 16 months, the Information Systems Program (ISP) will be working with Facilities Maintenance and Engineering and Computer & Statistical Services to replace the current Avaya phone system with a Cisco Unified Communications phone system. The Cisco system is already in use at the Advanced Technology Research Facility (ATRF).

Despite using different phone models, the Cisco and Avaya systems have been configured to work together throughout the project, so your phone number will not change; it will be moved to the Cisco system when you receive your new phone. You can continue to call other employees using their four-digit extensions, whether they are connected to the new phone system or not, until all Avaya phones are replaced. The implementation team is working to make sure that all features from the Avaya phone system will be available on the Cisco system.

“While the supportability of the existing Avaya system was the major reason for replacing it, the successful implementation at the ATRF was a significant factor in the decision to expand the Cisco system to the NCI Campus at Frederick,” said Greg Warth, director of the Information Technology Operations Group, ISP, and a member of the Voice over Internet Protocol (VoIP) Steering Committee.

The new phone system is a VoIP system, meaning that it uses the same infrastructure and wiring as those used by the computers connected to the NCI at Frederick network. The phones have a data “splitter” that allows them to connect to the same network wall jack that computers are connected to. 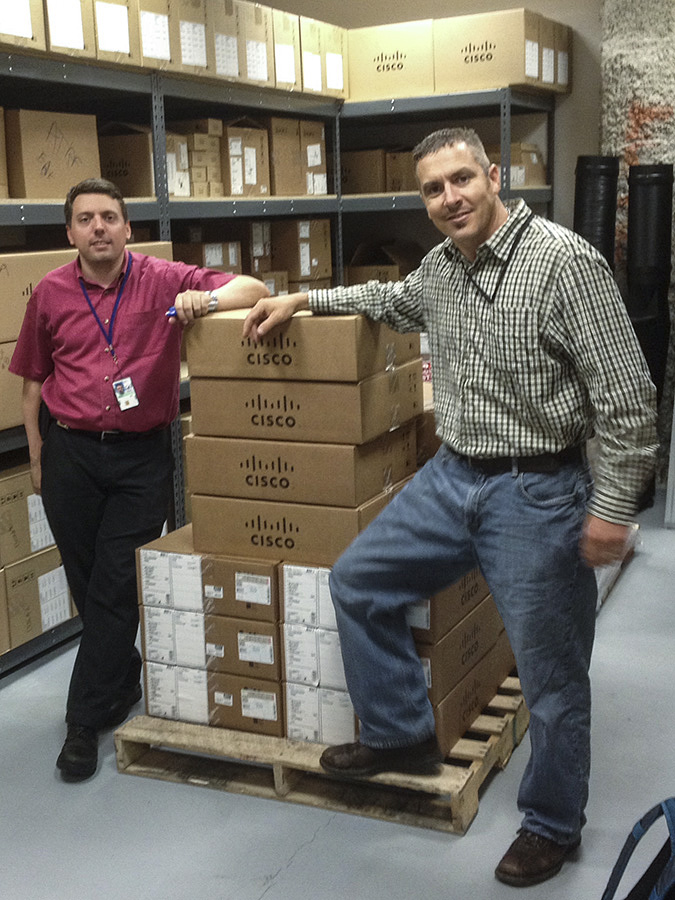 The VoIP system has many benefits, according to Trent McKee, one of the network specialists involved in deploying the system at the ATRF. “If you are moving offices, you can plug your phone into any working network jack on the NCI at Frederick network with no additional programming required on the system,” McKee said. “Additionally, if you have offices at both the ATRF and the NCI Campus at Frederick, the new phone system allows you to keep the same extension on both phones.”

The new system offers many features, including a selection of approximately 30 preconfigured ringtones, allowing employees to personalize their phones. The system also allows labs and offices to set up basic phone menu systems to transfer calls from a main number to other numbers.

Vikky Caulkins, administrative assistant, Partnership Development Office (PDO), Cancer Research Technology Program (CRTP), said her favorite feature is the missed call directory, which allows you to auto-dial any missed calls. “That’s very convenient and saves a lot of time having to look up a phone number,” she said.

Another feature of the new system is the ability to check voicemails from laptops or other mobile devices. “It is convenient to be able to listen to my work voicemail messages using my mobile device when on the go during the day, or to pick up voicemails from my laptop when working remotely,” said Bruce Crise, Ph.D., PDO, CRTP.

Training for the new phones will be provided one month prior to each building’s phone setup. This training will be made available in phases to all staff members located in each building throughout the deployment schedule.

Most NCI Campus at Frederick phones will be replaced beginning in September. A few buildings will have their phones replaced each month through December 2015.

If you have any questions about the new phone system, contact the NCI at Frederick Helpdesk at 301-846-5115, or FredHelpDesk@nih.gov.

Travis Fouche and Trent McKee are network specialists in the Information Systems Program.