Normal cells have mechanisms to prevent the development of cancer. Among these is a type of tumor suppressor mechanism known as oncogene-induced senescence, or OIS, which halts the uncontrolled growth of cells caused by mutations in oncogenes. The oncogene Ras plays a crucial role in inducing OIS through a specific cascade of proteins, as reported in a recent article in Molecular and Cellular Biology by Jacqueline Salotti, Ph.D., and colleagues in the Eukaryotic Transcriptional Regulation Section of the Mouse Cancer Genetics Program, Center for Cancer Research (CCR).

“OIS involves the activation of cascades of multiple proteins, including a key tumor suppressor called p14/p19Arf,” Salotti explained. Arf has many targets, including transcription factor C/EBP?, which, when active, “directly blocks genes involved in cell proliferation and induces genes involved in growth arrest, contributing to the onset of OIS,” she said.

However, Arf does not directly induce the Cebpb gene, which encodes for the C/EBP? protein, so Salotti and collaborators set out to determine what factors are between Arf and C/EBP? gene expression. Their research identified “the early growth response (Egr) family of transcription factors as direct regulators of Cebpb gene expression,” Salotti said.

Just as important, they found that in cells lacking Arf, oncogenic Ras has the opposite effect. Instead of inducing OIS, Ras “silences Egrs and consequently silences C/EBP? expression,” Salotti said. “In fact, in the absence of the cascade Arf?Egr?C/EBP?, oncogenic Ras is now able to induce tumorigenesis.”

Since oncogenic mutations in Ras are found in approximately 30 percent of all human cancers, including pancreatic, colorectal, lung, melanoma, and leukemia, Salotti said these findings elucidate the biological processes that underlie Ras signaling mechanisms and suggest that methods may be developed for reactivating Ras-induced senescence in tumor cells to inhibit proliferation. “I believe we would be able to rationalize drug design and/or use gene therapy to target Ras-driven tumors in the future,” Salotti said.

Salotti’s interest in cancer research sprang from a personal experience. After losing a family member to cancer, she felt an “obligation to help.” With a goal of understanding cancer cell biology, including what causes a normal cell to become a tumor cell and how to stop a cancer cell from proliferating, she earned an undergraduate degree in pharmacy-biochemistry and a Ph.D. in biochemistry/molecular biology from the University of São Paulo, Brazil.

“Of course, later I learned that cancer is not one single disease, but it is many diseases,” Salotti said, and she has since focused her research on Ras signaling “because a common cause of many cancers includes alterations in this pathway.”

After earning her doctorate, Salotti joined NCI at Frederick as a visiting fellow in the Mouse Cancer Genetics Program under Peter Johnson, Ph.D., where she remained for five years. In January 2015, she became a research fellow in the same laboratory, where she continues her research.

Today, Salotti is focused on finding important factors of the mechanism that tumor cells use to prevent a cell’s natural ability to suppress tumor growth.  “A tumor cell has many ways to block tumor suppression mechanisms,” she said.  “Our lab recently found a novel mechanism where tumor cells are able to silence C/EBP? tumor suppression activity. In brief, we found that the 3’UTR within the Cebpb mRNA can prevent the encoded C/EBP? protein from becoming activated.”

By identifying the factors that are significant to this mechanism and unraveling how these factors work together, Salotti said, Johnson’s group is “hoping to identify new promising targets for the development of anti-tumor drugs designed to reactivate senescence in cancer cells (‘pro-senescence therapy’). We believe the 3’UTR regulatory mechanism is likely to apply to numerous other proteins, affecting not only cancer, but also other cellular processes.” 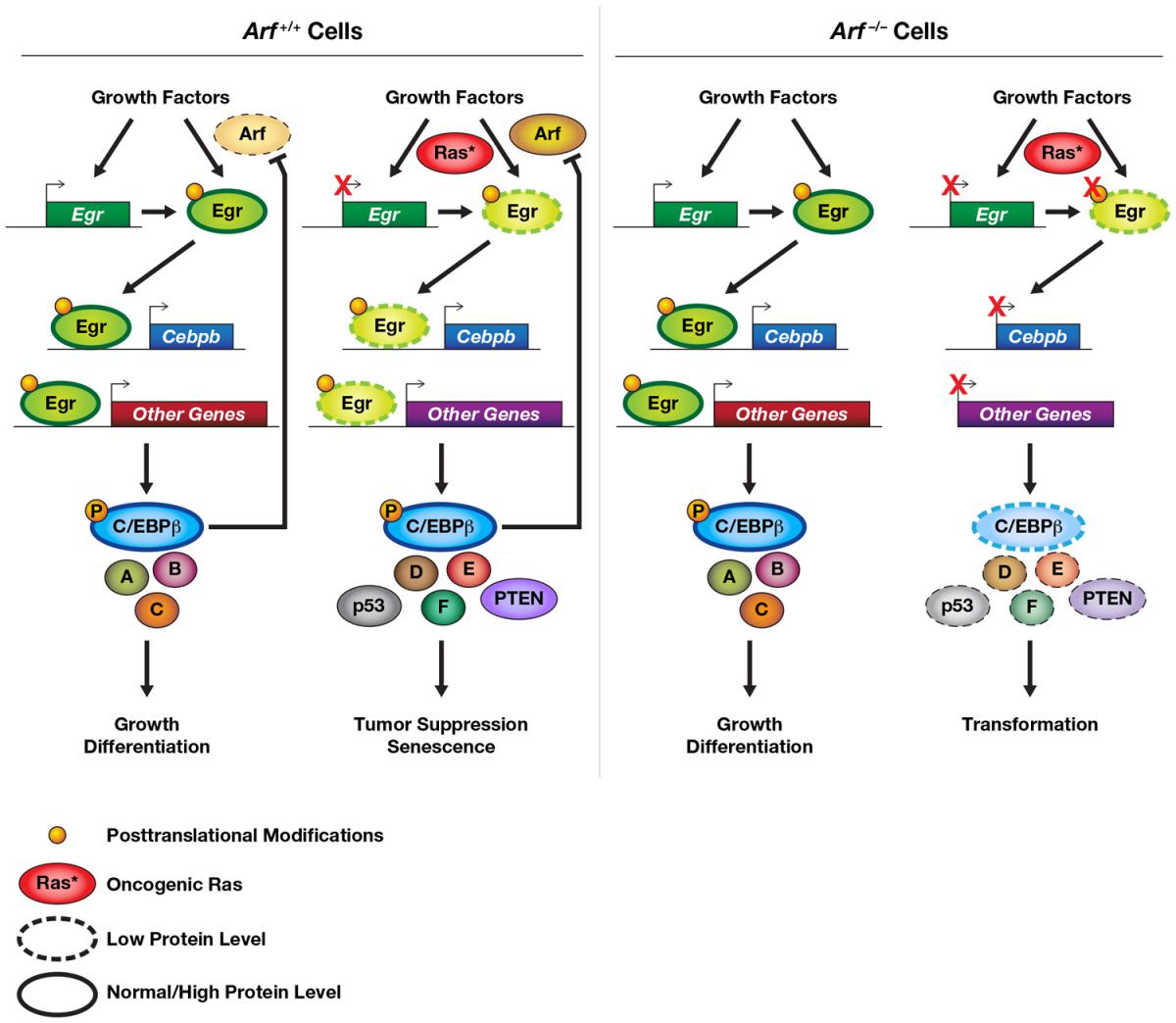 Her ultimate goal is that “our basic scientific findings of tumor biology will be translated into the clinic. Given the complexity of cancer, I truly believe the solution is the development of individualized/customized treatment for patients based on the type of mutations and nature of each cancer,” she said. She recognizes that much work remains to be done toward this goal, but, given that the White House recently announced a major biomedical research initiative known as the Precision Medicine Initiative, her hopes are “that this will happen in a not-so-far-away future.”

Figure caption: The Egr-C/EBPb axis is regulated by Arf and oncogenic Ras. In normal cells, growth factors induce immediate early genes, including Egrs. Egr proteins in turn activate Cebpb and other transcriptional targets. Depending on the cellular context, the outcome could be proliferation or differentiation (e.g., adipogenesis). In cells expressing oncogenic Ras, the phenotype depends on the presence of p14/p19Arf. When Arf is present (left panel), Egr expression is down-regulated by Ras. However, Egr protein activity increases, thus activating Cebpb and other genes (e.g., PTEN, p53) whose products inhibit transformation and/or induce OIS. In addition, through a negative feedback loop, C/EBP? can down-regulate Arf. In Arf-null cells (right panel), Egr and Cebpb mRNA levels are decreased further by RasV12, and the Egr proteins display reduced DNA binding. This effect is presumably due to the loss of specific post-translational modifications on Egr proteins. Post-translational activation of C/EBPb by RasV12 is also predicted to be suppressed in Arf-deficient cells. Decreased expression and/or activity of the Egr-C/EBPb network thus facilitates senescence bypass and malignant transformation.