Echoes from the Past: Frederick’s Flagship Immunotherapy Program, Part 4

The Biological Response Modifiers Program (BRMP) had come into its own. Gone was any thought that this was a fleeting initiative. It was a robust mix of clinical and laboratory science at the forefront of immunotherapy, what was becoming the next major method for treating cancer.

The program’s capabilities expanded in the second half of the 1980s, even as its clinical trials continued to reveal insights into biological agents for cancer treatment. The inpatient unit at Frederick Memorial Hospital grew from four beds to 13. The Cytapheresis Unit, which removed cells from donors and patients for clinical trials, increased its number of pheresis machines from one to three, with room for five more.

In January 1989, the outpatient unit moved from the hospital’s Medical Pavilion to the old Safeway building at 501 West 7th Street, just across the street from the hospital. The new unit, called the “Regional Cancer Therapy Center,” had six treatment rooms, three exam rooms, a phlebotomy room, a pharmacy, a laboratory, a counseling room, and offices with administrative facilities.

Meanwhile, the Preclinical Screening Laboratory at the Frederick Cancer Research Facility (FCRF) was screening dozens of biologicals annually for the BRMP—no small feat. Its work identified compounds and molecules with clinical prospects and weeded out the ones with less therapeutic potential, saving researchers from spending time, money, and effort on them.

The laboratory was so effective that it acquired an international reputation in scientific circles and served as a model for others to emulate. Visiting scientists came from around the world to work in it.

Elsewhere on the FCRF campus, the Fermentation Laboratory produced large quantities of biological agents for the BRMP. The Flow Cytometry Laboratory performed tens of thousands of tests on samples each year, while basic science laboratories conducted decisive preclinical studies to assess agents before they were administered to patients at the hospital.

“You really got the sense that everybody was there with a common goal of being able to better treat cancer patients, and we were very interactive with the clinicians over at Frederick Memorial,” recalled Howard Young, Ph.D., a former BRMP investigator and a current senior investigator at the National Cancer Institute at Frederick. “We felt that we were really contributing to the greater good.”

The BRMP also offered a training ground for the next generation of immunologists. Several staff members were postdoctoral researchers, and other fellows periodically worked with the program while training at universities.

“There was a fellowship program at Georgetown [University] for new physicians, who would do a rotation at the BRMP to get that clinician-scientist experience and exposure,” said Joy Beveridge, who oversaw the outpatient clinic in the late 1980s and early 1990s. (She is currently the operations director for the Frederick National Laboratory’s Clinical Monitoring Research Program Directorate [CMRPD].)

The BRMP’s clinical efforts reached impressive heights for its capacity. Between September 1988 and September 1989 alone, 233 patients joined 27 clinical protocols at the BRMP, while 202 remained enrolled from the year before. The Cytapheresis Unit performed 264 leukapheresis procedures on patients and 271 on donors that same year. There were 140 bone marrow donations. Administrative staff coordinated arrangements for 4,697 outpatient visits to the clinic—nearly 13 per calendar day.

“The BRMP staff felt more like a family—passionate, caring, and understanding. Everyone’s purpose was to provide the best possible care for every patient—and family member—that came to the BRMP. The patients were well taken care of from the time their first appointment was scheduled to the last clinic visit,” said Taree Foltz, who led the BRMP outpatient clinic administrative staff. (She is currently CMRPD’s administrative director.)

Working in the program was an inspiring experience. It was the chance to collaborate seamlessly with doctors, nurses, and clinical staff; laboratory scientists and technicians; and patients—with one shared purpose in the high-profile field of immunology.

“The morale was very good, and people were very positive about possible ways of dealing with cancer,” recalled Joost Oppenheim, M.D., a former branch chief in the BRMP and currently a senior investigator at NCI at Frederick. Many former staff echoed his sentiments.

“There weren’t any silos,” Young said. “We were here to help each other succeed.”

Beveridge, speaking from a clinical perspective, agreed: “There was no charter. … It was a clinic, it was a program, but I think we all very quickly followed the lead that this is a special place.”

‘Every Patient Was Special to Me’

For patients, it was particularly special. The majority had run out of treatment options. Though many of the BRMP’s trials were Phase I studies (preliminary studies that test for safety and side effects rather than effectiveness), they meant one more chance at treatment, even if it was a longshot.

Unfortunately, many patients’ cancers didn’t respond to treatment, sometimes even the effective ones. As much as working for the BRMP was fulfilling, it was also challenging and weighty.

“That’s what I admired about them: They didn’t know what to expect. They were hopeful for a cure, but they were committed and willing to do this clinical study,” said Sarah Hooper, Occupational Health Services manager at Frederick National Laboratory. She was on the hospital staff in the 1980s and helped care for BRMP patients who were sent to the intensive care unit.

“It touched all of us to see the caliber of the patients and see their desperate need to try to get a cure,” she added.

The staff was hopeful too. Beveridge recalls “a great level of respect” for the patients and a hope “that this [treatment] would help at least some.” There was compassion in the clinics, Foltz said. Even as patients struggled, many staff did what they could to comfort them. Employees across the program even assembled Christmas gifts for patients who were in the clinics over the winter holidays, a tradition that continued for years.

“When all other options were exhausted, it was difficult to have to share that information to both the patient and their family. It was easy to become close to each patient while they visited us. … Everyone was treated like part of our own family,” Foltz said.

The BRMP was a vibrant program: tightly knit, well connected, and—often—emotional. It was an exemplar of the humanity of biomedical research.

“Every patient and family that walked through that door was special to me. I felt like I had a purpose in their life and made an impact,” Foltz said. 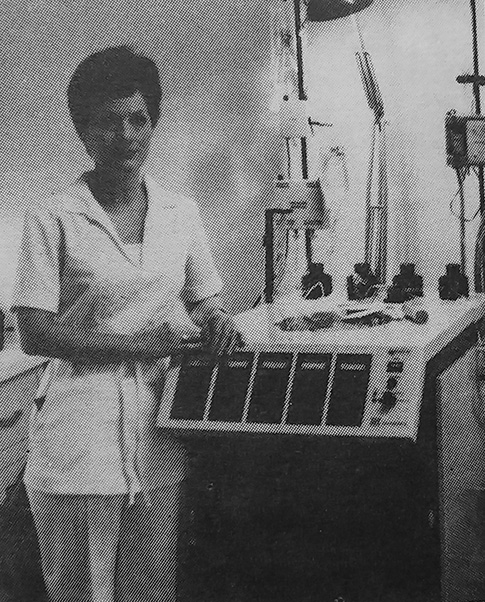