After 34 years at NCI, Robert Wiltrout, Ph.D., said he is looking forward to trading his I-270 commute for another type of commute: exploring the waterways of Maryland, Alaska, and Wyoming to fulfill his love of fishing.

Wiltrout officially retired as director of the NCI Center for Cancer Research (CCR) on July 2 of last year.

Throughout his college academic career, Wiltrout had an interest in science, but it was not until he was working on a research project for his master’s degree that he considered a career in scientific research.

“My experience at Penn State included a research project studying the effects of pesticides on the immune response, and that experience triggered my interest in both research and specifically immunology,” he said.

In 1981, Wiltrout’s career at NCI began when his laboratory was transferred from NIH Bethesda. “Part of the overall incentive for that [move] was increased space,” he said. “However, we all quickly recognized the wonderful benefits of the unique government/contractor partnership in Frederick that serves to facilitate scientific research in ways that are quite distinctive.”

At NCI at Frederick, Wiltrout spent many years focusing on his science, starting as a senior staff fellow, then as a tenure-track investigator, and finally as a tenured principal investigator. In 1999, he was appointed deputy director, Division of Basic Sciences. He became principal deputy director for CCR in 2004 and then became director a year later.

In addition, from 2002 to 2005, he served as associate director for NCI at Frederick. “That role was very different for me since it involved the broader activities of the Federally Funded Research and Development Center, and the partnership between government and contractor staffs,” he said.

As senior scientist for the Laboratory of Experimental Immunology, Cancer and Inflammation Program, Wiltrout said his group’s greatest achievements included an understanding of innate immunity, determining the roles of natural killer cells in the immune system and how they relate to cancer development and treatment, and using mouse models to study cancer immunotherapy.

“Overall, I’m pleased that our sustained efforts in immunotherapy have contributed in a small way to the larger efforts of CCR’s immunologists, which have played a very substantial role in the evolution of immunotherapy as a now widely accepted method for treating cancer,” he said.

He said he is “grateful for the opportunity to have worked with so many dedicated, smart people at many levels.” Those people are what he will miss the most about working at NCI at Frederick. “I feel lucky to have spent my career in such a supportive and successful environment where there have been so many opportunities to form productive scientific collaborations and lasting friendships,” he said.

Wiltrout’s plans for retirement include spending more time with his wife, children, and new grandchild. For the immediate future, he will be serving in a limited part-time role as special advisor to the acting NCI director. 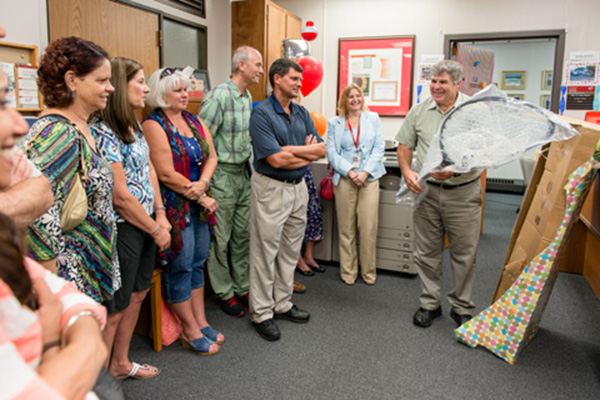