Joseph Barchi, Jr, Ph.D., calls teaching “the noblest and most important profession.” So it makes sense that Barchi, senior scientist and head of the Glycoconjugate and NMR Section, Chemical Biology Laboratory, Center for Cancer Research, NCI at Frederick, would encourage his lab to offer a fun, educational program at Take Your Child to Work Day (TYCTWD).

“Take Your Child to Work Day is an opportunity for those who work at the NCI at Frederick to share a unique STEM experience with their children,” said Melissa Porter, administrative manager for the Office of Scientific Operations, NCI at Frederick, as well as a coordinator for TYCTWD. STEM refers to science, technology, engineering, and math curricula and career paths.

The annual event, which was held this year on June 25, brings children ages 6 to 13 to the NCI Campus at Frederick to learn about scientific research; it is hoped that the event will also inspire children to pursue careers in science and health care. The day includes educational programs highlighting different aspects of research at NCI at Frederick as well as indoor and outdoor activities designed to get kids excited about science. More than 200 children attended this year’s event.

“I truly enjoy seeing [the] faces of children when they are ‘amazed’ at what science has to offer,” Barchi said. “This may potentially lead them to a career in chemistry or another STEM-like discipline.”

Participants register in advance for up to three 45-minute program sessions. This year featured 16 different programs for the children to choose from, based on their interests.

Magic in the Lab

Barchi’s lab sponsors the kid-favorite Chemical Magic Show, which demonstrates how chemistry can be just like magic in the lab, as well as in everyday lives, Barchi explained.

This was not the first year for the Chemical Magic Show. His lab has offered the program three other times; starting in 2012, Barchi even began sporting a wizard’s costume and cap. Last year, his lab had to take a break since he was out of town the day of the program, he said.

But this year, the Chemical Magic Show returned to the event—much to the kids’ delight. About 50 children attended the magic show this year; this is about average for the program, as between 40 and 60 kids attend the show every year, Barchi said.

“I hope the kids’ take away that there is a great deal of excitement in science,” Barchi said about his lab’s program. “I hope that, if anything, the demonstrations will pique their curiosity about experimental chemistry and science in general.”

Barchi said he and his lab will continue to participate in TYCTWD as long as he is at NCI at Frederick. He said he plans to perform different and additional experiments to keep all kids interested from year to year.

Jennifer Farrell, clinical research associate for the Clinical Monitoring Research Program (CMRP), Leidos Biomedical Research, said she enjoys watching the kids learn about what her directorate does, which is investigating infectious diseases through clinical trials. She, along with about twelve other volunteers in her group, developed their program, You Be the Investigator, in 2006, to help kids learn about infectious diseases—and have fun doing so.

Children then pair up, are assigned to one of the three diseases, and are given a project: transport a “patient” suffering from their team’s disease to the hospital, Farrell explained.

The patient is actually an egg, but not just any egg. CMRP’s volunteers prep each egg by blowing out the white and yolk, cleaning the egg with rubbing alcohol, and then refilling each egg with hand sanitizer, Farrell said.

The egg is transported to the “hospital” down an eight-foot ramp in a toy ambulance. The kids must build a device to keep the patient safe during the transport. The kids learn not only how to build a protective device, but also how to work together and stay within a budget. The program challenges the children to work with and use a specified amount of supplies, Farrell said.

Farrell said her directorate developed the program over time and plans to participate in TYCTWD indefinitely. “We enjoy exposing children to science at that age because it might spark interest later,” she said.

Holley agreed, noting that “the children get a lot of different, brief experiences throughout the day. They have fun here, and hopefully they learn something during the day.”

What Do “Plant Doctors” Do?

Her lab has participated in TYCTWD for at least seven of those nine years, and each year the lab changes the program topic. This year, participants in the lab’s Plant Disease under the Microscope program used microscopes to look closely at plant samples infected with fungi, bacteria, viruses, and insects.

Smallwood and her lab hosted 36 children and about 28 adults over three sessions. “Being a plant doctor can be fun,” she said. “We get to work outside in the sunshine, in the greenhouses, as well as in the lab. There are a lot of things to do with the USDA.”

Her lab plans to return next year if possible, Smallwood said. “We understand the importance of getting children interested in science at a young age. They are our future researchers.”

Sharing Science with the Next Generation

Other program coordinators would agree that TYCTWD is an important event for the Fort Detrick community.

“I believe that it is important to help share science with the next generation,” said John Britt, programmer analyst, Natural Products Branch, Developmental Therapeutics Program, NCI at Frederick. Britt and his lab host the Drugs from Bugs, Shrubs, and Slugs program.

Part of the program includes hands-on discovery, while the other part is more like a tour of the lab, Britt said, adding that children and adults alike seemed to enjoy their time in the lab.

Program participants explored how extracts are made from plants, marine organisms, and microbes, and how these are tested against cancer cells, in addition to learning how extracts are separated using chromatography to isolate new drugs, Britt explained.

His lab has participated on and off for the past 12 years, and plans to participate next year as well, to continue “to promote science to kids,” Britt said.

He recommends that other labs consider offering a program at next year’s TYCTWD. “It is fun and rewarding to share and watch children learn,” Britt said.

Barchi agrees. “It is a spectacular opportunity for kids to learn new and exciting things about science and what their parents actually do,” he said. 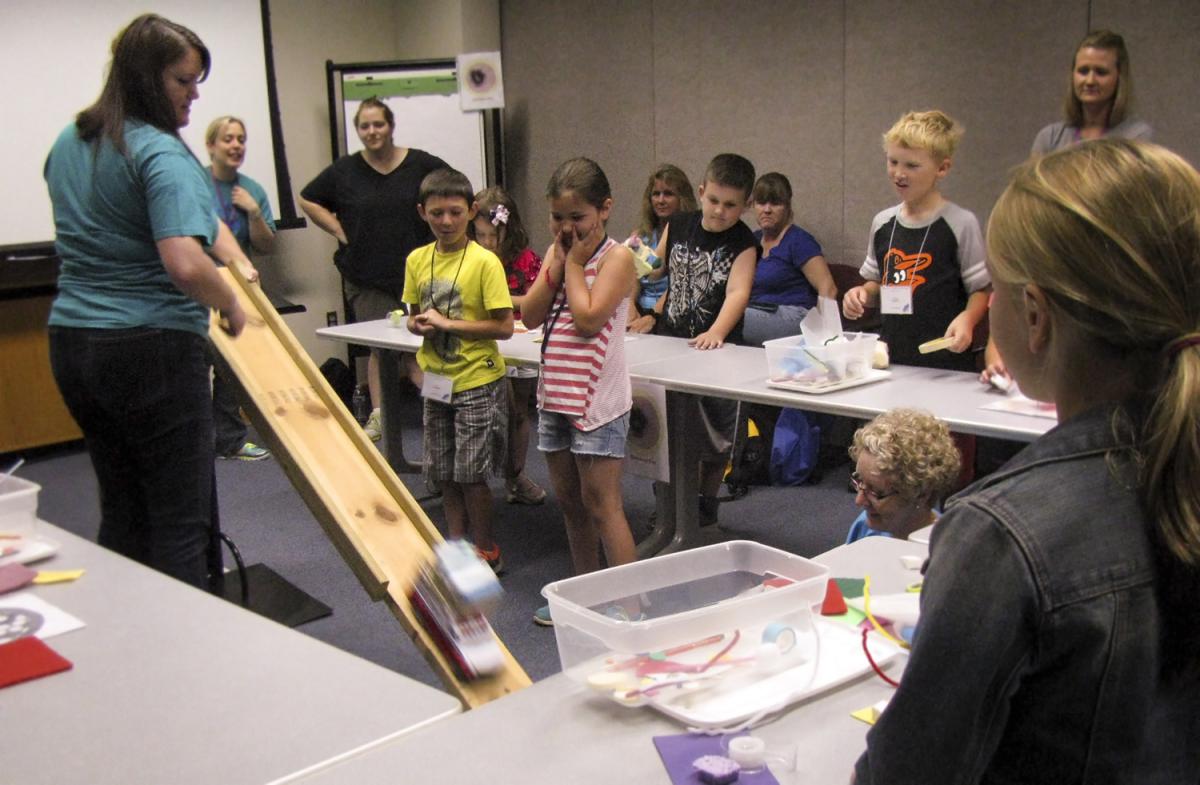 Caption: Children watch with great anticipation as their “patient” (an egg) travels to the “hospital” down an eight-foot ramp in their handmade “ambulance,” as part of the You Be the Investigator program at Take Your Child to Work Day. Photo courtesy of Jen Farrell, Clinical Monitoring Research Program.

To view photos of all the 2014 TYCTWD programs, visit the NCI at Frederick website.