Did you know that volunteers in the Elementary Outreach Program (EOP) just might be happier than their coworkers who don’t volunteer?

In addition, an August 14, 2014, Gallup study found that Americans who actively work to serve their communities have a higher overall sense of well-being than those who do not.

The correlation between volunteering and happiness could be a significant reason for NCI at Frederick employees to consider becoming an EOP volunteer.

“Through the creation of the EOP, NCI at Frederick acknowledges that volunteering can positively affect the health and happiness of our employees,” said Julie Hartman, program analyst, Office of Scientific Operations. “Not only that, but employees can positively influence and encourage the youth in our community.”

Terra Schaden-Ireland, research associate, AIDS and Cancer Virus Program, who has been involved with the EOP for about 12 years, confirms the positive feelings she gets from volunteering. “The smiles you see on the faces of the kids are unbelievable,” she said. “It really is the best reward for just a few hours of your time.”

NCI at Frederick enjoys the benefit of helping to encourage budding scientists. “The NCI at Frederick strongly believes in helping to train the next generation of scientists,” said Craig Reynolds, Ph.D., associate director, NCI.  “The Elementary Outreach Program does just that. We work hand-in-hand with Frederick County elementary schools to integrate real-life experiments into the classroom curriculum … We like to think that the NCI at Frederick’s Elementary Outreach Program plays a small part in why Frederick County has some of the best-ranked schools in the state.”

Dave Heimbook, Ph.D., president of Leidos Biomedical Research, notes the importance of the EOP in opening doors into the world of science for children. “Encouraging children to see or do a basic experiment plays to their natural curiosity and could start a life?long interest in science, even if the child never becomes an actual scientist,” he said.  “It’s also great fun for the kids, the teachers, and the Elementary Outreach tutor.”

Teaching Is Made Easy 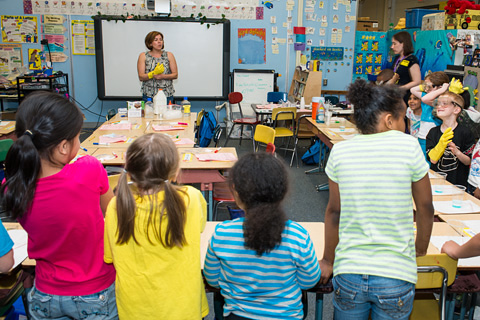 The EOP offers scientific, interactive lessons to Frederick County children in first through fifth grade.  Lessons have been created in coordination with Frederick County Public Schools, making teaching easy for volunteers, fun for the students, and beneficial to teachers by providing supplemental material to their curriculum.

Volunteers are given step-by-step instructions on each lesson, either in formal training sessions or upon request. Angela Carrigan, clinical project manager, Clinical Monitoring Research Program, said the training was helpful. “Before I started, I thought I had to have a [lot] of background knowledge to be able to run the experiments,” Carrigan said. “But anyone who goes to [the training sessions] … can do it. Or you can buddy up with someone else who’s done it, and learn as you go.”

Reynolds noted that both scientists and non-scientists are encouraged to volunteer for the program. “This is a great opportunity for both the students and the staff from the NCI at Frederick,” he said.

Being an EOP volunteer does not require a lengthy time commitment. In fact, volunteers can participate in the program for as little as two days over the course of the school year, with each day requiring no more than four hours.

With supervisory approval, employees of Frederick National Laboratory for Cancer Research can charge administrative leave during the hours they participate in the program.

Interns and fellows can also take advantage of this program to gain practical teaching experience.

Volunteering may not be the key to happiness, but, as the research shows, it’s a start. Carrigan notes the excitement in the children when the volunteers come to the classroom. “It’s always fun to see the kids get excited about the science experiments,” she said. “They look up to the volunteers as ‘science rock stars.’”

And that should make anyone feel good.

For more information, or to sign up to volunteer, visit the Elementary Outreach Program web page.