NCI Frederick’s Werner H. Kirsten Student Internship Program (WHK SIP) was recognized in May by the White House Office of Science and Technology Policy (OSTP) and the National Science Foundation with a 2020 Presidential Award for Excellence in Science, Mathematics, and Engineering Mentoring (PAESMEM).

Due to pandemic restrictions over the last two years, Excellence Awards for Science and Engineering (EASE) from 2020 and 2021 were presented during a ceremony at the Warner Theatre in Washington, D.C. Kristin L. Komschlies, Ph.D., acting associate director for Frederick, OD, NCI, and Walter G. Hubert, Ph.D., scientific program director for NCI Frederick’s Office of Scientific Operations (OSO) and scientific advisor for the Kirsten program, attended the event to accept the award which recognized the 30 year-success of the Kirsten internship program. Marsha Nelson-Duncan, former education outreach specialist in OSO, Melissa Porter, prior OSO administrative manager, and Chris Kane, Ph.D., chief for the Science and Technology Branch of OSO, all of whom have been instrumental in coordinating and supporting the internship program, were also on hand for the presentation. 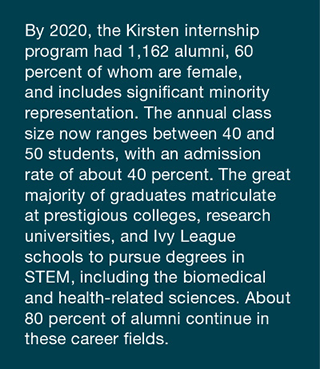 The award from the White House OSTP reads:

“The National Cancer Institute has always regarded training the next generation of scientists as paramount. This award bestows the highest honor to the mentors who have embraced the challenge of cultivating a STEM passion within aspiring high schoolers that translates into enduring careers.”

Howard Young, Ph.D., senior investigator, is one of those mentors. He worked with former NCI Administrator Gordon Cecil to get the Kirsten program off the ground three decades ago. “In the first year we had 10 applicants and selected six for internships,” Young recalled. In the ensuing years, as participation in the program has grown, he has touched the lives of scores of young people, helping to nurture the next generation of scientific leaders and physicians—and even a fighter pilot.

“While I cannot claim to know where all my students have ended up, I do know that a number went on to obtain their medical degrees, with others continuing in research, getting their doctorates or pursuing careers in the biotech industry,” Young said. “Giving students the experience of doing science allows them to better understand and apply scientific breakthroughs to their own careers.”

Even those who do not work side-by-side with the interns in their wet or dry labs are grateful for the opportunity to be a part of the internship program. Nelson-Duncan oversaw the Kirsten program for eight years, serving as the liaison between local schools, NCI mentors, and other agencies. She was instrumental in finding internship opportunities in both research and scientific support and followed interns as they progressed from nervous high school seniors to published researchers in their own right.

“At least half, if not 75 percent, of our interns return for summers during their college and post-bac and post-doc years,” she said. That creates a return-on-investment that makes the WHK SIP program a recognized asset for mentors’ laboratories across NCI Frederick.

Kirsten program staff and mentors often develop close bonds with the students, creating connections that impact them personally and professionally.

Prior to assuming her new role as the director of operations for NCI’s Center for Cancer Genomics in Bethesda, Porter supervised the Kirsten internship program for seven years. She was instrumental in expanding access to STEM programming to elementary school children in Frederick by encouraging students to enter county science fair competitions. Working with interns left a lasting impression on her. “I miss working with those young people,” she said. “Watching them grow and giving them room to run with their ideas was inspiring. They kept me on my toes!”

Nelson-Duncan said that nearly 95 percent of the 1,300 students who have participated in the Kirsten internship program over the years attended Frederick County Public Schools. “These students who live in the area surrounding NCI Frederick have an opportunity that other students in the country don’t enjoy,” she said. “The pool of applicants may seem small, but the benefit to society reaches far beyond Frederick due to this fantastic, long-term, experiential learning opportunity.”

Young agrees. “I am grateful for the opportunity to give back to the community by enabling local students to have the chance to do real science,” he said. “It supports our NCI Frederick mission to train the next generation of scientists while also helping make the Frederick area a better place to live.” 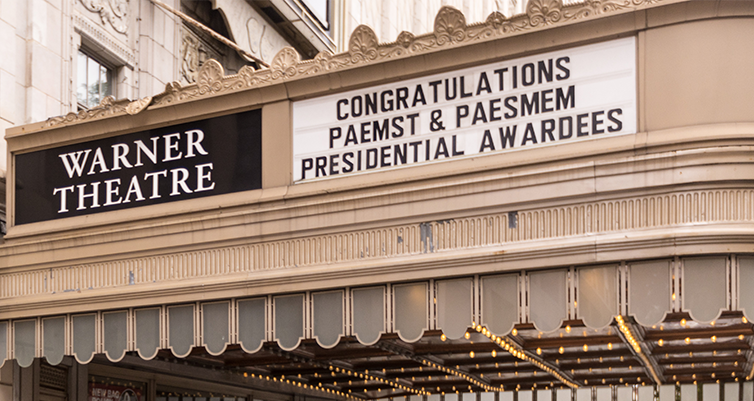