Echoes from the Past: A New Institution for Cancer Research Is Born

Editor's note: This is part one of a series about the history of the National Cancer Institute at Frederick and the Frederick National Laboratory for Cancer Research. Please do not reproduce or repost any of the images in this article.

On October 18, 1971, President Richard Nixon emerged from the U.S. Army Post Headquarters at Fort Detrick into the sunlight of one of Frederick’s signature autumn mornings. Nearby, a crowd of dignitaries, Army officers, and journalists from local and national news outlets had gathered to hear his remarks about the former biowarfare research facility. He greeted them, paused to make a good-natured joke about the Baltimore Orioles, then delivered an announcement that altered the course of biomedical research in the United States.

“Where we have previously had scientists—some of the best people that we could possibly find in the United States—working on weapons of war, we now have scientists devoting their efforts toward saving life, rather than destroying life,” he said.

With these words, the facilities that would eventually be known as the National Cancer Institute’s Campus at Frederick and the Frederick National Laboratory for Cancer Research were born.

Nixon’s announcement was the culmination of years of work to change the character of Fort Detrick and strengthen the nation’s cancer research efforts. Two years earlier, he had halted all research into weapons for biological warfare, initiating a chain reaction that led to more than 1,000 highly qualified employees at Fort Detrick being displaced or laid off. Meanwhile, he had declared “an intensive campaign to find a cure for cancer.” Maryland senators Charles McC. Mathias, Jr., and J. Glenn Beall, Jr., soon persuaded him that the two situations could be addressed at the same time.

“In January of this year when I made an announcement with regard to a new initiative for the conquest of cancer, we needed just what this facility had to offer,” Nixon said to the crowd gathered at Detrick, referring to his State of the Union Address from earlier that year.

He added that, to ensure flexibility, an independent contractor would conduct the new research on behalf of the National Cancer Institute (NCI). He also stated that the once-top-secret facility would be open to visitors and scientists from around the world to foster unity and collaboration.

A statement released by the White House on the same day expressed similar sentiments.

“For thousands of years, mankind has dreamed of turning swords into ploughshares and spears into pruning hooks,” it said. “Today we mark another chapter in the realization of that dream.”

A Story of the Century

The press hailed the president’s announcement with fanfare. A headline in the Baltimore Sun proclaimed, “Detrick overcomes unsavory past,” while the Washington Post said the bureaucracy had switched from “Death to Life.” Nightly news anchors at NBC, ABC, and CBS reported on the decision.

Later, the Hagerstown-based Morning Herald would even argue that “circumstances could make it one of the top stories of the century” in the region.

Nixon wrote the next chapter of that story in December, when he signed the National Cancer Act of 1971 into law. The act strengthened NCI and granted its director new powers and privileges, such as the ability to develop and expand research facilities nationwide, including at Fort Detrick.

Such work began in earnest as 1971 passed into 1972. The Army leased 67 buildings from its old high-security area at Fort Detrick to NCI at no cost until their ownership could be formally transferred. Many are still part of the NCI at Frederick campus, which is inside the gates of Fort Detrick but not owned by the Army. Teams of surveyors and photographers from NCI and the National Institutes of Health are believed to have visited during this time to examine the new facility, which was soon named the “Frederick Cancer Research Center” (FCRC).

On June 23, 1972, NCI announced that it had signed a one-year, $6.8-million contract with Litton Bionetics, Inc., to operate the FCRC and fulfill 12 broad, large-scale tasks, such as preparing and characterizing carcinogens, producing virus samples for research, and producing test and diagnostic reagents. This independent contractor operating model was the first of its kind within the National Institutes of Health. The contract was also the biggest single one that NCI had ever completed.

Litton named Dr. Robert E. Stevenson, a former NCI scientist, as its new vice president and general manager of the facility. Around this time, NCI appointed Dr. William Payne as the FCRC’s first scientific coordinator and Ronald Defelice as its first contracting officer. Much remained uncertain, however, including whether Litton would be able to profit from the operation.

Three days later, the FCRC’s first group of employees—just 15 people—arrived for work. They spent most of their first week acclimating to their surroundings and hiring more staff. Another six employees were added by the end of the week, and the staff grew to over 100 people within one month.

Many of the new hires were facilities and maintenance personnel charged with the herculean task of renovating the decontaminated former Army buildings into offices and laboratories suited for a cancer research facility.

“When we first went into these labs, it looked like they had just dropped everything they were doing and moved out,” said Dexter Makel, a now-retired employee from Facilities Maintenance and Engineering. He was among the first laborers to join the maintenance team in 1972.

“All the instruments were still there. All the chemicals were still in their cabinets. Everything was still in place,” he added.

Meanwhile, the growing staff, joined by a small team of NCI administrators, was moving into the renovated space as soon as it became available. Elements of a Chemical Carcinogenesis Program were formed to study the relationship between chemical agents and cancer, while an administrative team was established to support them.

“The environment was still evolving, setting up different policies and standard operating practices. It was a busy time,” said Diane Simmons, one of the first senior secretaries to join the program. She retired from the position of executive secretary at the Frederick National Laboratory in 2013.

A Public Information Office was also established to meet the facility’s editing and public affairs needs. As 1972 progressed, they began publishing the FCRC’s first newsletter, FCRC Focus, which contained news from around the facility, employee profiles, and an “In the Market” section where employees advertised everything from gently used ski pants to a 1938 Ford pickup truck.

By the end of the year, Litton Bionetics’ staff at the FCRC had grown to 261 employees who were setting up or operating 11 of the 12 assigned tasks. However, there was much left to do: the FCRC’s land still belonged to the Department of Defense, most of the buildings remained unrenovated, and the nascent programs were just finding their footing. Other scientists were also beginning to take note of the facility, and their opinions weren’t entirely favorable. NCI and Litton would soon have to act. 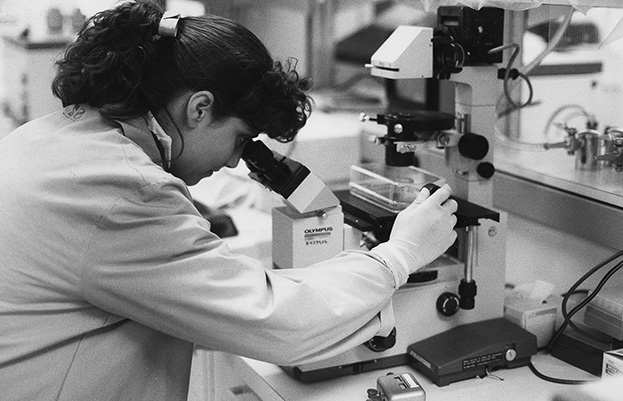