As the anniversary of the birth of the Rev. Dr. Martin Luther King Jr. approaches, I’m reminded of two other, equally noteworthy, events that have special meaning to aficionados of excellence in speechifying. And they are especially significant to those in our geographical area; both occurred within 50 miles of Frederick, Md.

The first event occurred on Aug. 28, 1963, when King delivered a speech in front of the Lincoln Memorial during the celebrated March on Washington for Jobs and Freedom demonstration. The other event was 100 years earlier, on Nov. 19, 1863. That day, Abraham Lincoln delivered a brief speech to dedicate the Soldiers’ National Cemetery in Gettysburg, Pa. The former is considered the greatest American speech of the 20th century, and the latter, now known as the Gettysburg Address, is arguably the greatest American speech ever.

Most Famous Words Never Written into His Speech

King’s speech is most commonly known as the “I Have a Dream” speech. Of interest is that those four words do not appear in his heavily edited, prepared remarks for that occasion. King had used them before, however, with slightly different wording, in front of smaller audiences around the country.

As he prepared to give his speech that day in Washington, he was aware that, for the first time, he would be broadcast on all three television networks, and was thus addressing the entire country. The day before, adviser Wyatt Walker even specifically cautioned him against use of the “I Have a Dream” oratory, saying, “It’s trite, it’s cliché. You’ve used it too many times already.”

King worked with speechwriter Clarence Jones on several drafts of his speech until 4 a.m., when he gave the final text, written in longhand, to his aides to print and distribute. It did not contain those now-famous four words.

King was the final speaker on a 16-item agenda that included the national anthem, an invocation, a prayer, two sets of songs, and nine other speakers. It was 87 degrees and humid that day. King knew that his words, the final words of the day, needed to resonate with the crowd.

Stepping Down on the Other Side of History 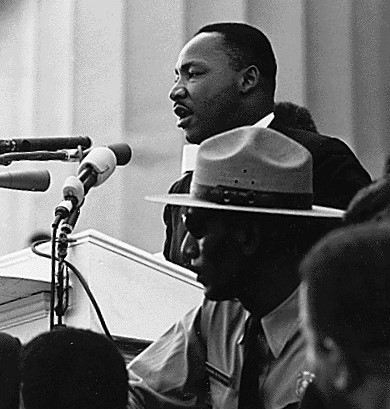 He began his speech slowly, sticking to the prepared text. John Lewis, then leader of the Student Nonviolent Coordinating Committee, recalls that it was a good speech, but not as powerful as many that he had heard King make. As quoted by Gary Younge in The Guardian, Lewis observed: “As he moved towards his final words, it seemed that he, too, could sense that he was falling short. He hadn’t locked into that power he so often found.”

King completed his text and then pushed it to the side. Until this point, he had been speaking as a lecturer. Now, looking at the crowd rather than the printed page, he gripped the lectern with both hands and said, “So even though we face difficulties of today and tomorrow, I still have a dream.”

Walker, who had discouraged that oratory, was heard to issue an expletive and groan.

The rest of King’s speech—the part that went on to become a part of American history—was delivered extemporaneously. As Jones later related, “though [King] was extremely well known before he stepped up to the lectern, he had stepped down on the other side of history.” And this was due in part because he ignored the advice of one adviser and spontaneously accepted the urgings of another.

Great oratory seems to be a combination of a great deal of preparation, an equal amount of practice, and the ability to sense the audience’s reaction. King had given the “dream” speech several times and knew that it resonated with his audiences.

King did that day what effective presenters do. Just as a football quarterback “reads” the defense and changes the play by “calling an audible” when he does not like what he sees, King read his audience, and when he sensed that his message was not truly hitting home, he fell back on a familiar theme, one that he had perfected by having used it several times before.

Whether speaking on a national stage or simply presenting a seminar for colleagues, effective presenters pay close attention to their audience and make course corrections when necessary. King’s on-the-spot decision to do so that day in fact made history.

A final irony is that when King left the lobby of the Willard Hotel to put the final touches on his speech, he remarked that he hoped it would be received “like the Gettysburg Address.” And he gave that speech in front of the huge statue of Abraham Lincoln on the mall later that day.

Photo caption: Martin Luther King Jr. gave his “I Have Dream” speech on Aug. 28, 1963. Photo from the National Archives.

References:
Spratling, Cassandra, King’s ‘I Have a Dream’ speech that moved a nation almost took another path, Detroit Free Press, June 22, 2013.
Top 100 American Speeches of the 20th Century, University of Wisconsin-Madison News.
Younge, Gary, Martin Luther King: The story behind his ‘I have a dream’ speech, The Guardian, August 9, 2013.