NCI at Frederick’s 21st summer farmers’ market has officially begun, and this year’s vendors invite all employees to visit, browse their wares, and learn about the benefits of consuming all-natural products. The market is held every Tuesday until October 16 from 10:30 a.m. to 1:00 p.m. outside of Building 549—rain, shine, or, in the case of the most recent Tuesday, snow.

2018 is the first year at the summer farmers’ market for mother and daughter Alexandra Tyrone-Hopko and Melissa Hopko, who spent the snowy Tuesday at their booth in the foyer of Building 549. The duo owns So Very Special, a Frederick-based LLC that specializes in dozens of varieties of herbs and plants, as well as all-natural, handmade beauty products that use oils and fragrances extracted from those plants.

“We also specialize in scented geraniums,” Alexandra said. “They’re amazing. Not only do they smell good … but you can also eat them.” Melissa added that they also sell a “mosquito shocker” variety that helps to repel mosquitos when planted outside.

Farmers’ markets have been part of the Hopko family for decades. Melissa’s father and grandmother started the tradition, participating in eight markets a week. After both passed away, Melissa and Alexandra continued the business.

The Hopkos are joining 19 other vendors at NCI at Frederick who, collectively, will be offering an array of homegrown and handmade goods, including fresh vegetables, pickles, herbs, various meats, fresh breads and pastries, beauty products, flowers, and crafts.

“They’ve got just about everything you want. It seems like a good way to get together and buy good stuff, buy locally,” Alexandra said.

That sentiment was echoed by Carol Britt, co-owner of Slice of Heaven Farm, who was set up across the foyer from the Hopkos.

“All [employees] have to do is just walk through here. They can pick up lunch, supper, snacks, presents of all kinds—without having to go off-base,” she said.

“We Help Each Other”

According to Carol, Slice of Heaven has been a regular vendor at the market for seven years. Her husband, NCI at Frederick employee John Britt, began by selling eggs before branching out into naturally fed chickens and ducks. Carol has since expanded their inventory to include several jams and jellies as well as handmade crafts, many of which are sports-themed.

The Britts include their homeschooled children in the business to teach them about basic entrepreneurship, customer relations, and work ethic. It was one of the reasons why the family began participating in farmers’ markets.

Overall, Carol believes that their experience has been positive, especially because of the close relationships they’ve formed with customers and vendors.

“We help each other,” she said. “That’s what it comes out to. … We have customers, and if we don’t have something [but] we know they’re looking for, we send them to the other vendor.”

Great Food and a Long Legacy

Undeterred by the snowy weather, three more vendors set up booths in the Building 549 parking lot. Laurie Waltz was among them, her Ford Windstar van parked along two tables sporting signs that advertised several cuts of meat.

Along with her husband, Jacob, Laurie co-owns Waltz Family Farm, which has been in Jacob’s family for over 240 years. The pair has attended the NCI at Frederick market for eight years, ever since they learned about it during a Google search for mid-week farmers’ markets near their Smithsburg, Md., home.

Waltz Family Farm sells beef, pork, and lamb that Laurie says are “seasoned with real ingredients, not things you can’t pronounce.” They also offer 10 varieties of Colby and cheddar cheeses crafted by an Amish cheesemaker.

Like her husband, Laurie grew up on a farm that belonged to her family for over 200 years. At this point, she says, “it’s in the blood.” She added that, thanks to farmers’ markets, Waltz Family Farm has been very successful, and she has greatly enjoyed participating in the market at NCI at Frederick.

“The vendors at the market have become like an extended family. Many of us have gotten quite close,” she said.

“We Depend on the Customers”

One of Laurie’s friends, veteran vendor Rudy Medicus, owner of Cat’s Paw Farm and former NCI employee, was set up two booths away. In an interview outside of market hours, he said his farm specializes in fresh produce and herbs.

“Fresh fruits and vegetables are locally grown and consistently taste better than produce shipped from long distances,” he said. As a scientist, he explained that eating produce treated with preservatives and chemicals—which his farm doesn’t use—can affect the body’s natural functions.

This year, Cat’s Paw will be emphasizing counter-seasonal and tropical crops, such as fig bushes, turmeric, and ginger, thanks to a new greenhouse on the farm.

Medicus added that his wife, Judy, “will [also] be bringing the best cookies and muffins you ever tasted.”

Despite his anticipation, though, Medicus is concerned about this season. He withdrew from last summer’s market because he wasn’t doing enough business. Like many vendors, he said, farmers’ markets are part of his livelihood, not a hobby.

Farmers’ market coordinator Morgan Covert, NCI at Frederick Office of Scientific Operations, said she hopes to help this year’s vendors, including Medicus, by bringing more attention to the market.

“If there are no customers, [there is] no market,” he said.

Balcazar has participated in the NCI at Frederick market since it opened in 1998, regularly bringing baked items from his shop at 138 North East Street in downtown Frederick. He currently offers several pastries and over a dozen types of bread, including whole-grain, challah, and olive. Everything is artisan and handmade.

Like many others at the market, Balcazar’s trade runs in his family. His parents are bakers, and when he decided to use his degree in small business administration to open a shop, a bakery was the natural choice.

Since then, he says he has tried to connect with customers at every opportunity—in his bakery, and at farmers’ markets.

“We depend on the customers,” he said. 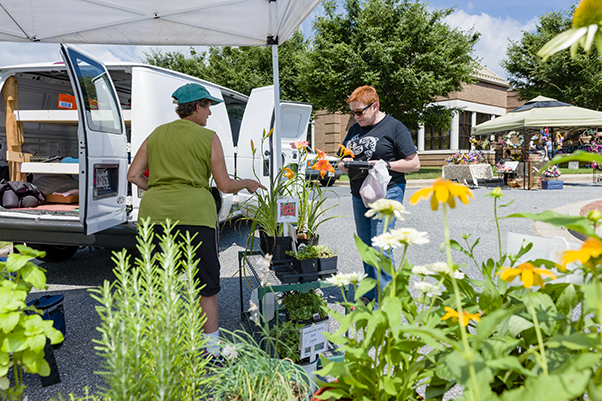 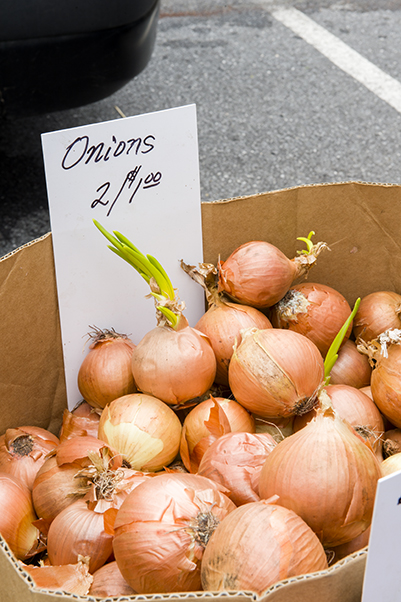