Car and Motorcycle Show Brings “Gearheads” and Fans Together

On Sept. 24, the Building 549 parking lot was full of cars; however, unlike any regular work day, the spaces were filled with a variety of classic cars, street rods, motorcycles, and unique modern cars for display in the first car and motorcycle show hosted at NCI at Frederick.

The R&W Club Frederick hosted the event to give employees a chance to show off their cars and compete for prizes, for a good cause. Proceeds from the entry fees were donated to Special Love, a nonprofit organization that offers Camp Fantastic, a week-long camp for children living with cancer.

Dave Heimbrook, Ph.D., president, Leidos Biomedical Research, Inc., is credited with coming up with the idea for the car and motorcycle show, explained Amy Imming, a volunteer with R&W Club Frederick and one of the event’s organizers.

“I ride a motorcycle, and I had noticed a number of sports cars in the parking lot,” Heimbrook said. “Most ‘gearheads’ enjoy displaying and talking about their cars, so it seemed like it might be a fun thing to do.”

Heimbrook said all the credit goes to R&W Club Frederick members, who, along with Monica Slate, his administrative assistant, planned and organized the event. 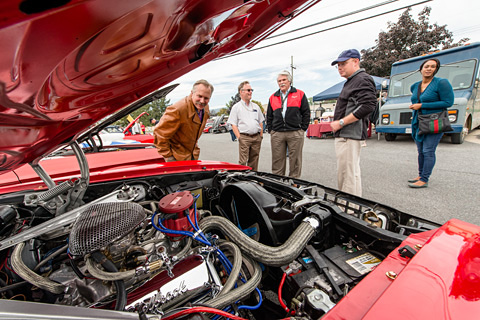 R&W Club Frederick members could enter one vehicle into the car and motorcycle show for free. In addition, they enjoyed a free lunch from Sweet Lips BBQ.

About 95 people attended the event, which featured about 15 vehicles spanning many years. The oldest car was a 1949 Plymouth Special Deluxe coupe. Two vehicles shared the title of being the newest: a 2014 Dodge SRT Viper and a 2014 BMW S1000RR motorcycle.

“The best part for me was watching everyone interact with each other,” Imming said. She said participants had pride in their vehicles, and she enjoyed watching the camaraderie between participants and attendees, regardless of their position at NCI at Frederick.

While there was no cost for attending the show as a spectator, attendees could donate $1 to Special Love for a chance to vote on their favorite vehicle in each of four categories: historic, newer/modern, street rods, and motorcycles. Each category awarded first- and second-place bragging rights, except street rods, which awarded only first place.

“I like talking to people about their vehicles,” Eyler explained as to why she participates in car shows. Her favorite vehicle was the only winner in its category: a 1951 Ford English Panel street rod.

Eyler participated in the car and motorcycle show to help raise money for Special Love, and she said she would attend a future show.

Lenny Smith, clinical project manager II, Leidos Biomedical Research, said the 1951 Ford street rod was his favorite car, too. Smith, who has participated in three other car shows, scored first place in the newer car/truck category. He wanted to participate in this one because “it was a unique event at Fort Detrick,” he said, adding that he would definitely attend a future show.

Tracie Frederick, technology informationist, NCI at Frederick Scientific Library, attended the car and motorcycle show but did not submit an entry. “I thought this was a great idea for a new, unique R&W event,” Frederick said, adding that she wanted to encourage the club to host similar interactive events for the NCI at Frederick community. She said that the event was a clever way to raise funds for Camp Fantastic.

“I liked that staff could show a different side of themselves by sharing an interest outside of work,” Frederick said.

Imming said she hopes R&W Club Frederick will host another car and motorcycle show, or make it an annual event.

The club also wants future car shows to include the rest of the Fort Detrick community, Imming said.

Heimbrook said he hopes a future show brings more participants and spectators, adding, “I would also like to have everyone start up and rev their engines at the same time—see how much noise we can make!”

Above image: Those who attended the R&W Club Frederick Car and Motorcycle Show on Sept. 24 had a chance to view a variety of classic cars, street rods, motorcycles, and unique modern cars.