On Sept. 8, more than 40 NCI at Frederick and Leidos Biomedical Research employees, along with family and friends, swapped work clothes for golf gear at Maryland National Golf Club in Middletown. The golfers didn’t just play for fun; they participated in the second annual R&W Club Frederick Golf Tournament to support The Children’s Inn at NIH.

The Children’s Inn provides a home away from home for seriously ill children and their families seeking treatment at NIH. It’s one of three NIH charities that R&W Club Frederick and its parent organization, NIH R&W, regularly support.

Craig Reynolds, Ph.D., associate director, NCI, participated as a golfer and enjoyed the tournament. “It was a great event to support The Children’s Inn, and I look forward to playing again next year,” he said.

“I absolutely love setting up this tournament,” said Tanya Ransom, biologist, NCI Center for Cancer Research, and secretary of the R&W Club Frederick. She also coordinated the golf tournament.

After visiting The Children’s Inn at NIH and experiencing the joy it brings children and their families, Ransom said she wanted the R&W Club Frederick to continue hosting the tournament each year to support the inn. “It is a magical place that tries to reduce some of the stress that these children are coping with,” Ransom said. “The environment is a very peaceful place, which helps take their minds off of being sick and in a hospital, while they are at the inn.”

Last year, the club hosted its inaugural tournament, which was well attended and a success, and received some suggestions for improvement. Ransom said the club took the feedback seriously and worked to make this year’s tournament better.

For example, the club changed the venue to Maryland National Golf Club. “I’m so happy we did that because the location and course were beautiful,” Ransom said, adding that the golf club staff was very accommodating, which made for a “wonderful” tournament.

Ransom called the tournament a success—and booked Maryland National Golf Club for next year’s tournament, which will be held on Monday, Sept. 14, 2015. Proceeds will once again benefit The Children’s Inn at NIH. 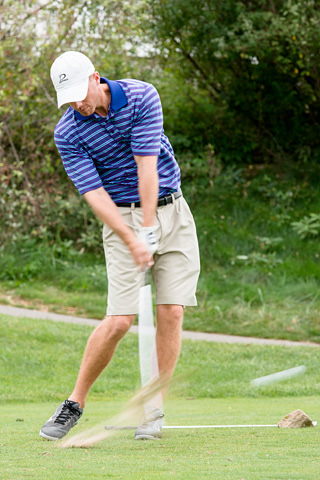